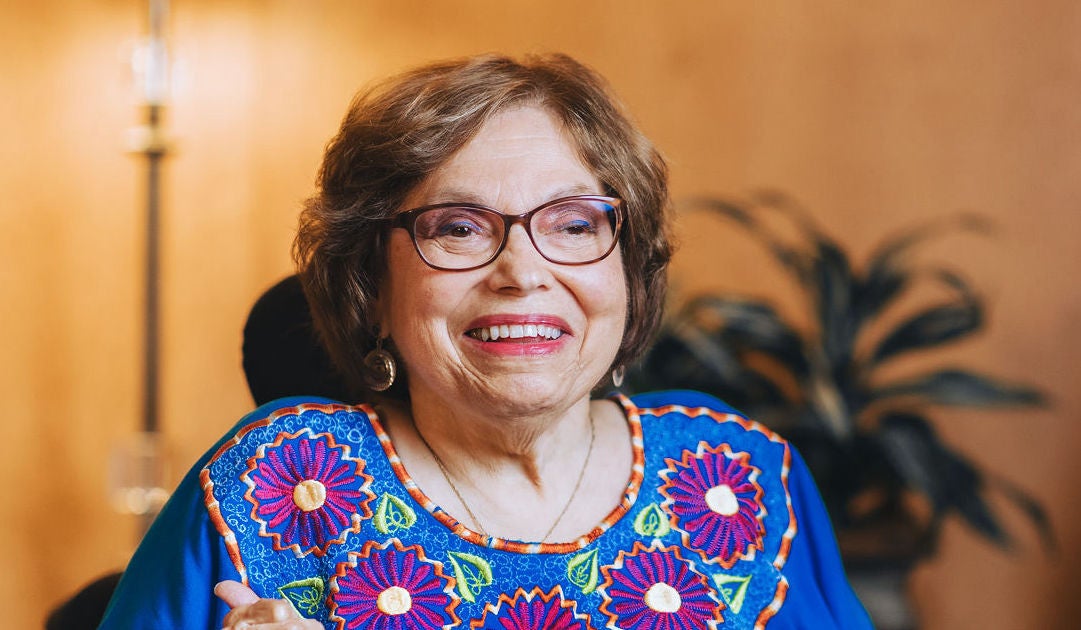 Judith Heumann, who lives in Washington, DC, is the author of two books, including her recently published memoir, Being Heumann. She is also featured in Netflix’s award-winning documentary, “Crip Camp,” which was nominated for a 2021 Oscar. Photograph courtesy of Judith Heumann.

International disability rights activist Judith Heumann inspired Perkins Eastman’s architects, planners, and designers last week to think beyond the required accessibility standards in their work, and harness their creativity and innovation to design environments that are both accessible and impactful.

“Standards are very valuable because they establish certain baselines,” Heumann said in a firmwide presentation, hosted by Perkins Eastman Director of Communications Trish Donnally. Complying with those standards, however, is “a floor, not a ceiling” in designing public buildings for a population where more than one in four Americans has some type of disability. “You want to be building a building that people will speak about,” she said, “and with a population of people—children through seniors—the need for universal design is something we need to be taking more of a leadership role in,” she said.

Heumann knows intimately how personally harmful inaccessible buildings can be. She was denied the right to attend her neighborhood school because her wheelchair was deemed a fire hazard. Her college, Long Island University in Brooklyn, had two steps into the lobby from the sidewalk with no ramp alternative, and, bizarrely, a step into the bathroom off her dormitory hall. And the tests she had to take to obtain her teaching license were all held in buildings with no accessibility, forcing her to ask friends to drag her wheelchair up the steps. “What is so novel about steps?” she asked, still incredulous that they persist as an architectural default. “What is it that people feel are so beautiful about steps versus a ramp? You have more accidents on steps. You have fewer accidents on ramps.”

One benefit of steps? Heumann had to yell from the bottom of them at friends’ houses when she was a girl to announce her arrival. “I really had to learn how to assert myself, how to yell, how to deal with embarrassment” from an early age, she pointed out. “I was learning just to look at what my goal was, and that has served me well over the years.” So well, in fact, that she led a historic, 26-day sit-in at a San Francisco federal building in 1977 to force the government to sign regulations implementing Section 504 of the Rehabilitation Act. The law, passed four years earlier, prohibited federally-funded organizations from discriminating against disabled people. It led to the 1990 passage of the broader Americans with Disabilities Act (ADA), in which Heumann was also an instrumental leader.

Thirty-one years after the ADA’s passage, Heumann is still fighting to change the fundamental language around disability. First and foremost, she said, “we are not the problem.” Disabled people don’t have “challenges” navigating the built environment, she explained; the responsibility lies with governments, civic groups, individuals—and designers—who plan each city, town, development, and structure. “I don’t use the word ‘challenge’ anymore. I use the word ‘discrimination,’” she said. Heumann also bristles at terms such as “barriers” and “accommodations,” as if design elements such as wider doorways for wheelchairs or high-contrast color palettes for people who are visually impaired should lie outside the normal design process. The typical design vocabulary shouldn’t impose any “barriers.” In other words, if those design elements were accepted as integral to a building as a wall or a floor, and not a special “accommodation,” there would be fewer problems. Yet another perspective that needs to change, she said, is the notion of being able-bodied. “I don’t use the word ‘able-bodied.’ I use the word ‘nondisabled,’ because it is statistically likely that you will acquire a temporary or a permanent disability,” she explained. “Too many people don’t think about it.”

Rather, excellent design can demonstrate that becoming disabled doesn’t mean giving up anything, either at home or in public. “I think [it takes] really looking at yourselves,” Heumann told the Perkins Eastman audience, “and finding out: Do you have a bias around accessibility, or do you see it as something that should just be a core value?” Again, she noted, “Not only are we not the problem, but we need to be a part of the solution, and we’re not going to allow excuses to keep us out of society.”

The ongoing COVID-19 pandemic, tragically, makes an even more compelling argument for inclusive design, since the virus has killed some 141,000 nursing-home residents, according to the Centers for Medicare & Medicaid Services. “Those people in many ways were living in these nursing homes because they could no longer stay in their own homes. One factor is accessibility, or needing personal assistance when there are memory issues, visual issues, auditory issues,” Heumann noted. “There is a value in universal design, and it shouldn’t be something that’s being looked at just for nursing homes and segregated environments, but rather for people to be integrated throughout their lives.”

That notion goes to one of Perkins Eastman’s most cherished values in every design it produces: Sustainability. Being able to age in place obviates the need to move into new housing. Inclusive design in the public realm means that buildings can last into the foreseeable future without significant upgrades or retrofits. It’s within the power of the firm’s architects and designers to design accessibility with beauty, so it’s a highlight and not a legally required add-on, Heumann emphasized. “These are some of the things I feel are in your capacity. You need to be articulating a convincing message about why we need to do things differently.”

Perkins Eastman employees who wish to watch the full interview can see it via the firm’s in-house PERKS portal.