Earth Day, first celebrated half-a-century ago today, was founded to inspire people to become responsible caretakers of the planet. During this time of the COVID-19 crisis, the ambitions of Earth Day are arguably more critical than ever before. This pandemic and the inequities that it lays bare have made it clear that we must re-imagine our cities in profound ways. As we explore the possibilities that architecture can offer a post-pandemic world, we must design the spaces that comprise our neighborhoods and cities to be connected, adaptable, and strong. In a world of uncertainty, we must plan for resilience.

As architects, designers, and planners, we are experts at crafting, framing, and structuring the ideas that must lead us forward. It is our prerogative and our license to channel these ideas — the creative visions and energies — and convert them into actionable, sustainable plans.

In planning for the future, we often look to the past. In December 2015, Perkins Eastman shared an ambitious vision in which we proposed to convert a seemingly endless tract of concrete and traffic congestion into a green oasis by connecting nearly 40 city blocks transecting the island of Manhattan into a linear public park. We called this the ‘Green Line.’

The Green Line is a re-imagining of Manhattan’s Broadway.

If implemented, the Green Line would change the face of New York City by replacing the wide boulevard of Broadway — one of the city’s busiest and longest roadways — with continuous green space and public amenities: lush planting, permeable pavers, bio-swales, playgrounds, dog parks, a running and bike path, performance spaces, and sitting areas. The vehicle-choked boulevard would return to its roots as a ridge-line walking trail, while the city’s many beloved outdoor spaces along Broadway’s path: Union Square, Madison Square, Herald Square, Times Square, and Columbus Circle, would become a living network of green connections.

The Green Line would provide a continuous green space that transects Manhattan. 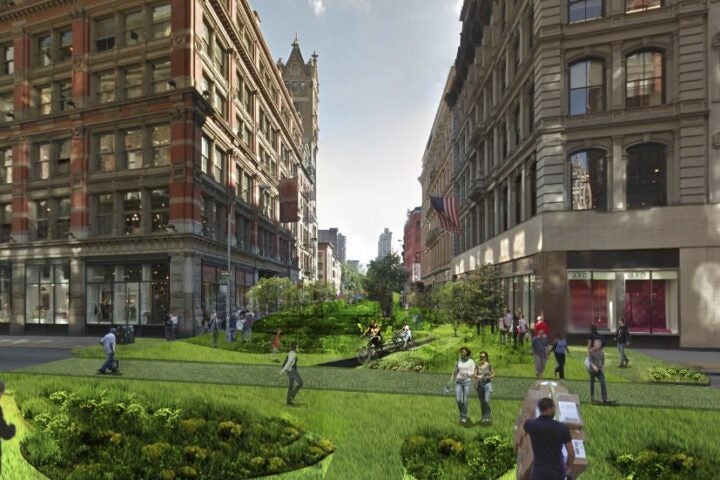 The Green Line garnered media interest for its visionary ideas and was covered in Dezeen, CityLab, and The Architect’s Newspaper, among other publications.

Though the proposal is now nearly five years old, the themes it highlights: human-scaled outdoor spaces, storm water management, and a continuous, pedestrian-accessible network of city parks, are just as relevant today.

But it is not the first, nor the last innovative reframe/rebrand of city infrastructure. In light of the devastation left behind in Italy from the COVID-19 outbreak, the city of Milan is exploring a similar concept and considering the closure of 22 miles to vehicular traffic to allow better pedestrian and bicycle access. And the imperative to equitably provide human-scaled outdoor spaces for people, in congested urban centers like New York City and elsewhere, has been brought up on numerous occasions in major news outlets over the past five weeks. Take for example the fascinating graphic, produced from publicly-available data, and shown below and linked here, which explores the spectrum of Manhattan’s social distance-appropriate sidewalks. 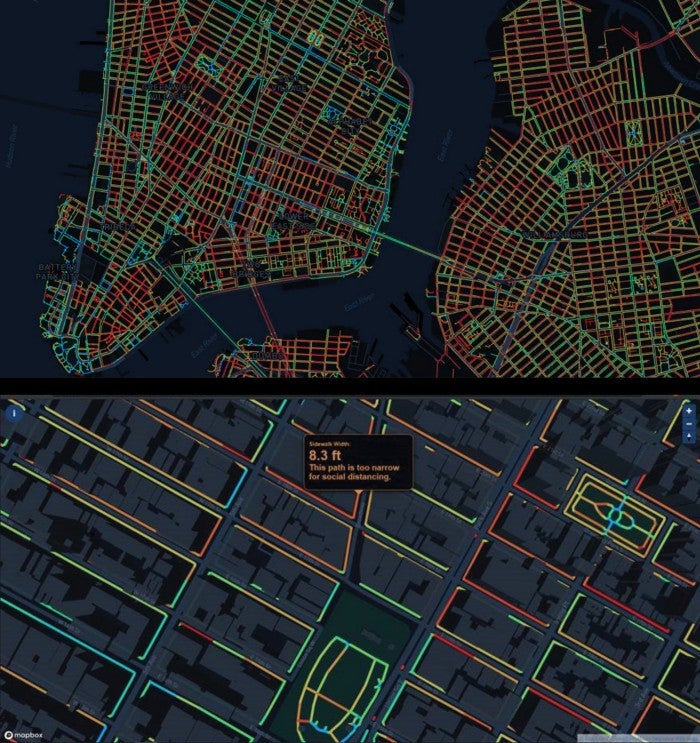 A graphic representation of the spectrum of social distance-appropriate sidewalks in New York City.

In celebration of the 50th anniversary of Earth Day, we hope to once again ignite the conversation and challenge traditional thinking about city planning and infrastructure. In a world largely designed to accommodate the daily commute — to work, to school, to the store — perhaps we use this time away to do what we do best.

Let’s embrace creative ideas as we design our cities to be more walkable, more livable, and more human in scale.