As the world reopens, this month’s Pride celebrations offer renewed dedication to a Perkins Eastman team and their collaborators who are building an exhibit for DIFFA’s signature design gala. 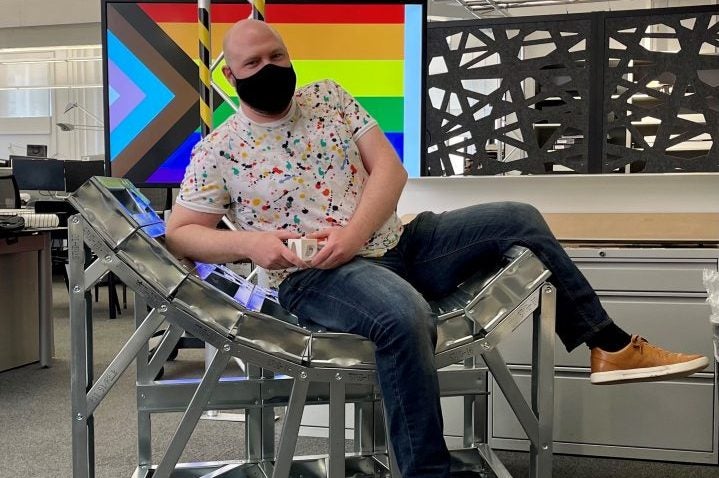 LGBTQ Senior Associate Charles Sinclair reclines on a sample of the exhibit’s steel framing with a tiny 3D-printed mold of it in his hands. Photograph by Connor Glass/ Perkins Eastman

A creative team led by Perkins Eastman Principal Connor Glass was working on a display in March 2020 for the firm’s debut appearance at the annual fundraising gala for DIFFA, the Design Industries Foundation Fighting AIDS, when the pandemic shut everything down. The event has been postponed until March 23-27, 2022, giving the team additional time to refine its exhibit. And if a Pride-Month event next week is any indication of the turnout to come, Glass’s team and their collaborators will have a huge audience next spring.

DIFFA is holding its first post-pandemic, in-person fundraiser in New York on June 21, forty years after the first five AIDS cases were reported in 1981. Tickets to the event vanished within a week of its announcement, Executive Director Dawn Roberson said. “I couldn’t believe the response—it sold out so quickly!” she said. “As a nonprofit, to have this much support is overwhelming.” The timing during Pride Month is particularly special, she added. “We lost so many beautiful, creative spirits to HIV/AIDS. I’ve always thought we should do this as a nod to Pride. That’s all culminating with this event, all in support of a community that has supported us for so long.”

Back at Perkins Eastman, the designs are nearly locked in for the gala display, where the team is partnering with a sponsor, porcelain manufacturer Florim, to create an exhibit that personifies Unity, the event’s theme. Though the team can’t get into specifics before the exhibit’s reveal, it will be a structure designed to unify a social, actively engaged environment with a more personal, contemplative one, Glass said – and he’s grateful for the extra time the pandemic allowed. Where they originally had just a month to conceptualize and build something, they ended up with more than a year to develop their ideas. “We decided to make lemonade out of lemons,” he said. “We wanted to explore architecture and design with something that was more meaningful and less temporary.”

The result combines metal, stone, painting, and fabric—all with the help of computer algorithms and robots.

Glass, working with associates Brick McMenomy in Los Angeles and Jose-Miguel Armijo Vielma in New York, collaborated with Florim to incorporate porcelain as a flowing, organic form. “The hardest application of porcelain, which is rigid, is to make it round and apply it to a metal structure,” said Claudio Petucco, Florim’s vice president for business development in North America. “On paper, it looked kind of impossible, but we worked together to bring it to life,” added Michael Torsiello, a senior Florim associate for business development. The process of animating this form became more defined when the team was awarded a scholarship and residency with the software firm Autodesk. The company paired the group with STUDIO, a resident at the Autodesk Technology Center in Boston. STUDIO focuses on steel-stud bending technology, where computer programs instruct robotic tools to cut and mold steel into almost any shape. Armijo Vielma, who founded the Data Unit team within Perkins Eastman, was able to apply his own scripting programs to instruct the machines “to make holes in the steel and bend it in ways that are super precise,” he said. “This is a particularly intricate structure,” added Scott Mitchell, STUDIO’s founder and CEO, “due not only to the complex geometry, but also to the precision required for [Florim’s] finish tiles to line up perfectly.” 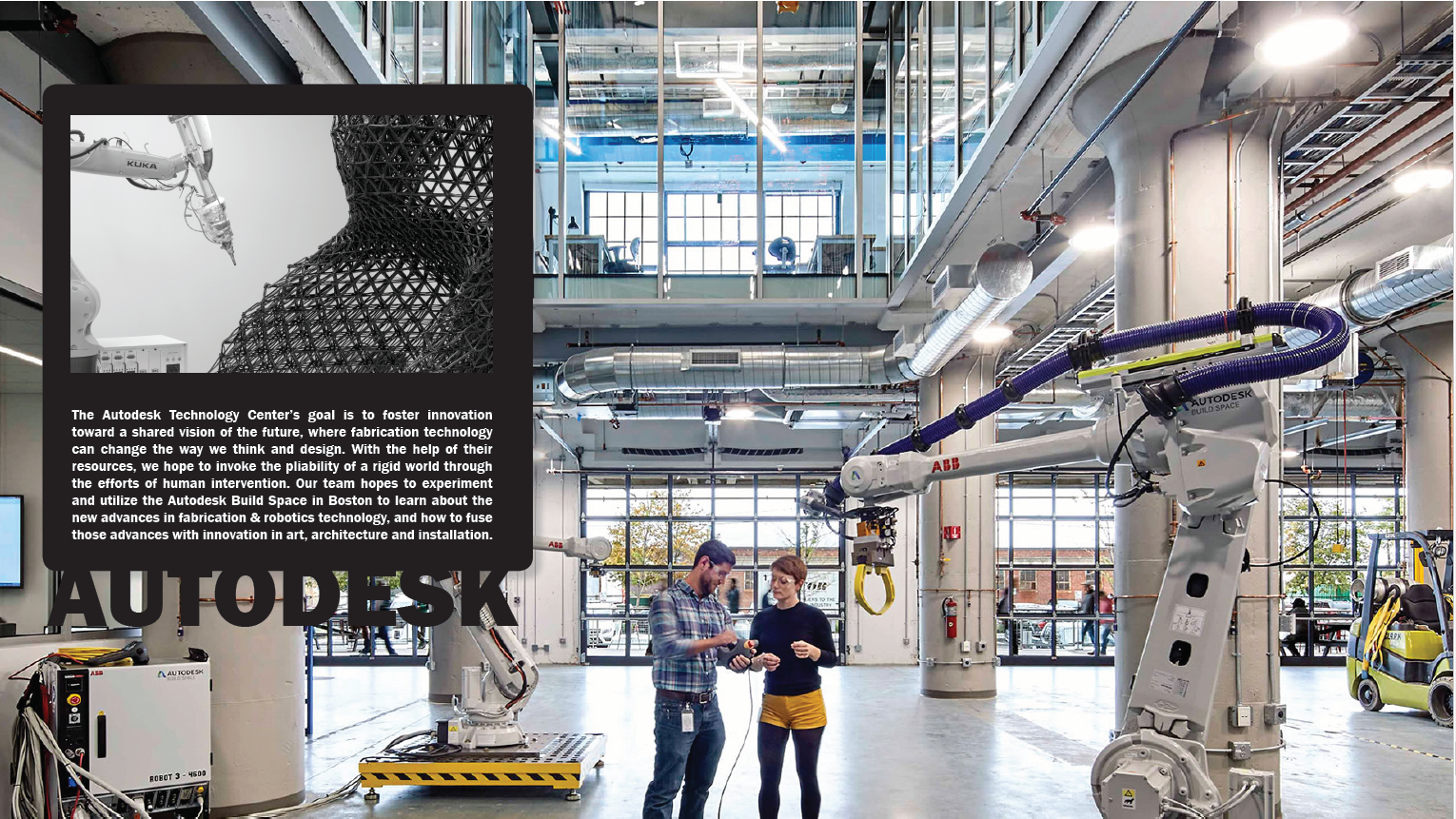 For now, they have a 3D-printed model of the structure and schematics for its metal framing. Cut files will be sent to Florim in Italy, which will cut two types of porcelain into thin strips to follow the form’s curvaceous interior and exterior surfaces.

With the foundation is in place, the artistry comes in. Glass turned to vendors in his workplace practice area to enhance the structure’s design. Paulina Ribadeneyra owns Workspace Consulting Group, a modern commercial furnishings dealership in Stamford, CT, and she’s commissioning New York fiber artist Richard Zimmer to paint fabric that will cover the seating portions of the DIFFA installation. Zimmer was selected through The Alpha Workshops, a New York nonprofit that provides decorative-arts education and employment to artists with HIV/AIDS and other disabilities. Zimmer, a long-term AIDS survivor who’s worked with Alpha for eighteen years, said his artistic contributions to DIFFA over the years have been intensely personal – especially now that HIV and AIDS treatment is so effective and readily available. “I’ve been in the trenches. It’s a different perspective from the young people,” said Zimmer, 62, who was diagnosed with AIDS in his 20s and recovered due to then-experimental treatments that were coming available in the late 1980s. Young patients “never saw the protests, they never saw ACT UP, they never saw the [protest] coffins at the White House,” he explained. “People don’t realize that if drugs weren’t available, it would be a big crisis. Without these medications, a lot more people would have died a horrible and ugly death.” 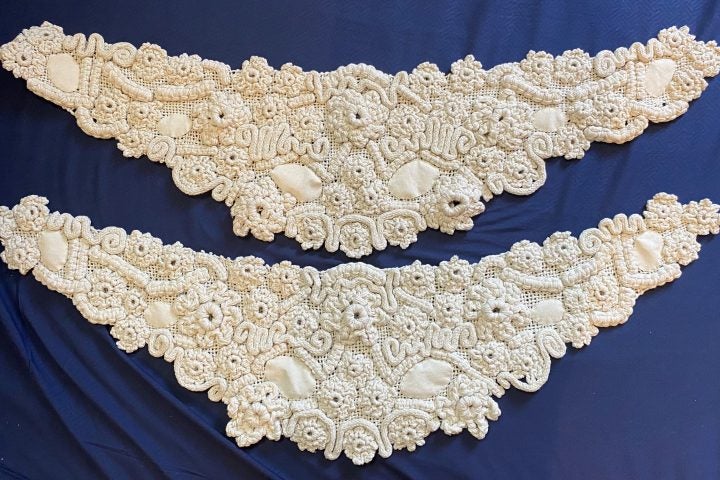 Zimmer created a series of intricate curtain tiebacks for a ballroom, crafted from hand-weaving on board, crochet, knitting in the round, and macrame. Image courtesy of Richard Zimmer.

Rami Afifi, whose eponymous company fabricates custom millwork and built-ins for many of Perkins Eastman’s interior projects, will be using Zimmer’s painted fabric to upholster the seating in the DIFFA installation. “I can’t not be involved with that. It’s giving back to the community,” says Afifi. “AIDS research has been lacking, especially when you see what happened after this pandemic, with the funding that went into these [COVID-19] vaccines in months, when it took years and years” to find effective treatments for AIDS, he added. 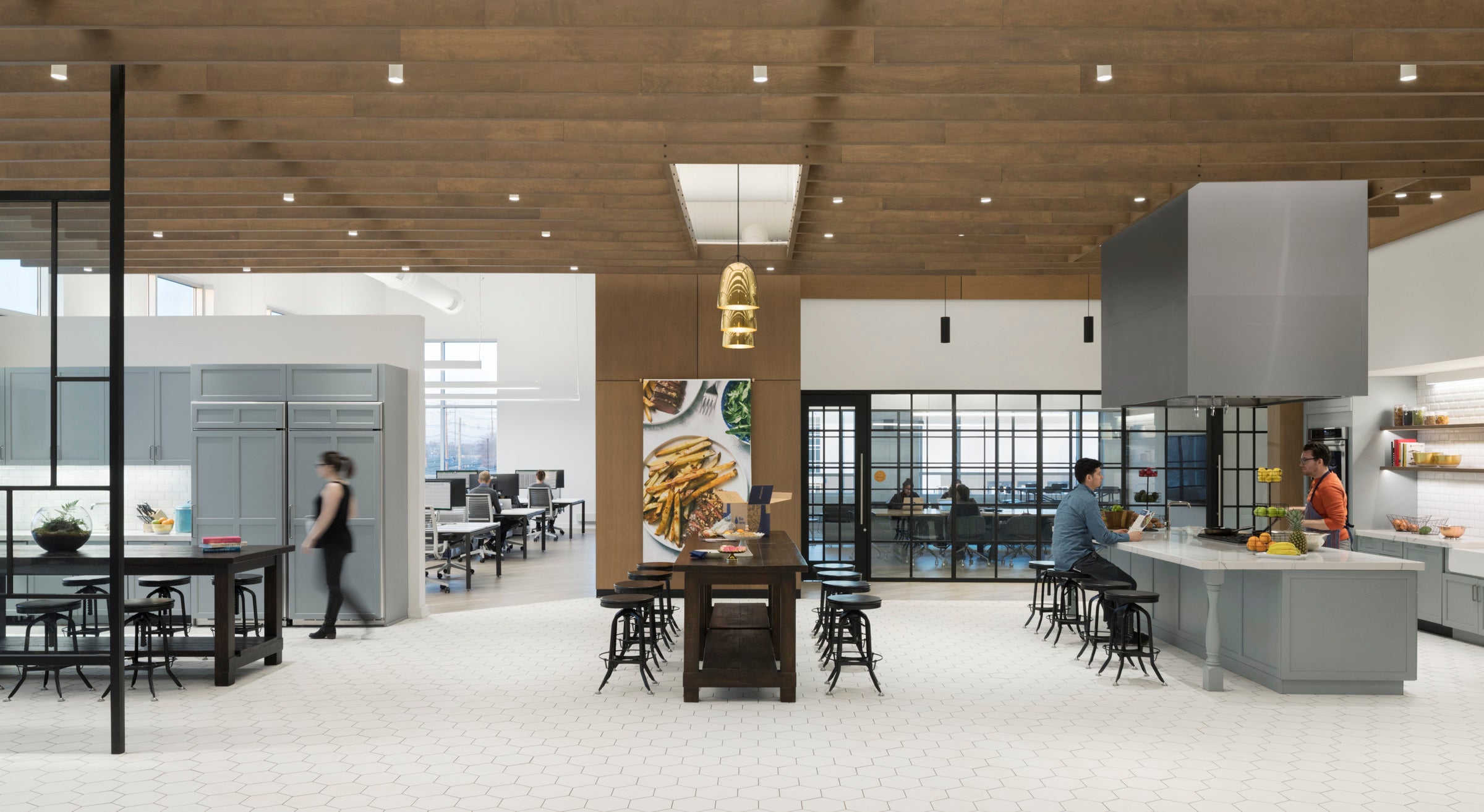 Rami Afifi did all the woodworking for the wall and ceiling panels and the cabinetry for the fulfillment center at Blue Apron in Linden, NJ, a Perkins Eastman project. Photo copyright Paul Rivera/ Courtesy Perkins Eastman.

Since DIFFA was founded in 1984, its annual fundraising gala has been called “Dining by Design,” in which architecture and design firms were invited to create environments in which guests would eat their meals. The upcoming gala is part of a five-day event that also includes a separate cocktail party, pop-up shopping, raffle prizes, and an auction – and it will be the first to depart from the dining focus. This time, the invited companies will be creating exhibits of pure design inspired by the “Unity” theme. “Now you can showcase them until the event is over,” DIFFA’s Roberson said, instead of eliminating them by virtue of people eating at their decorated tables. Perkins Eastman will be joining other firms such as HOK, Gensler, Rockwell Group, and STUDIOS, while Florim is among sponsoring manufacturers such as Benjamin Moore, Cosentino, and Julian Chichester. With the help of DIFFA Board Chair Cindy Allen, the editor-in-chief of Interior Design magazine, the organization paired Florim with Perkins Eastman to contribute. “We play this role as matchmakers,” Roberson said.

If the colors of the rainbow symbolize support for the LGBTQ community, Glass equates his experience with the DIFFA project to a similarly broad spectrum of artisans and makers who have come together to create the display—Egyptian-Muslim and Latin-X business owners; a gay artist who survived AIDS and an arts cooperative dedicated to supporting his community; plus a tech startup that’s charting new paths in design fabrication technology. “It’s about the diversity of the group we pulled together for the advocacy of AIDS in New York,” Glass said. “It’s not just about LGBTQ folks. It’s about our allies and a diversity of thought.”