In Memory of Christine Schlendorf

Our hearts are heavy with the recent passing of Christine Schlendorf, our colleague and friend. 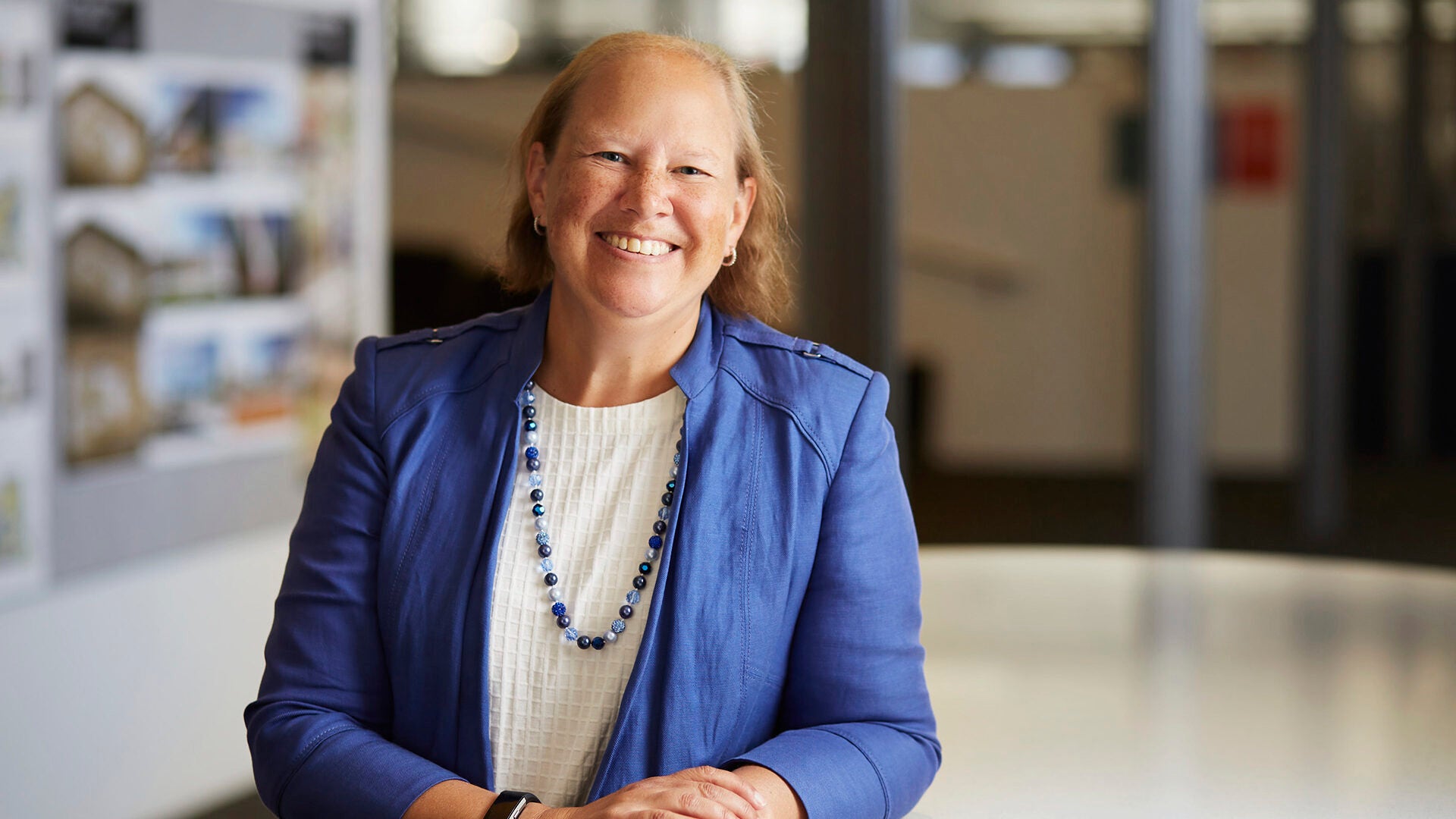 The best of Perkins Eastman

Christine joined Perkins Eastman in 1997, graduating that same year from Syracuse University with a Bachelor of Architecture. Christine didn’t simply work at Perkins Eastman; she grew up here.

“Perkins Eastman is so grateful to Christine for all she did to make us who we are today. She was key to the successful development of our wonderful K-12 practice and the surrounding studio, but her real gifts to us have been to the core culture of the firm. She brought so much joy, fun, and community to us as a firm; she was a true role model—one who showed how to work hard and still enjoy the other joys of life. At the same time, she led some of the key projects that are now the foundation of our K-12 practice.”
– Bradford Perkins FAIA, MRAIC, Chairman

She was a leader in New York Studio 12, in the New York office, in our K-12 Education practice, in the design of learning environments around the world, and in our broader industry and community. She was instrumental in the development of our women’s leadership and mentoring programs and was one of our first Board members. Her passion for learning environments took her beyond the studio; she was deeply involved in volunteer, fundraising, and development efforts for the schools and communities in which she worked. Through these many efforts, she advocated for educational access and opportunity. She was all in, every time. Students and communities literally the world over are better for it—as are we.

“I always judge a person’s leadership ability by the posse they build around themselves. Christine had a huge posse at Perkins Eastman: the studio she built, the practice area she was instrumental in building, her contributions to women’s leadership—and especially the culture of giving back and having fun that she established. Our hope is that she knew how incredibly special she was to her Perkins Eastman family, and that her family knows the same.”
– Mary-Jean Eastman FAIA, MRAIC, Vice-Chair

For more than 20 years, Christine Schlendorf created innovative educational spaces that shape the way students identify, absorb, and retain knowledge. She was admired for embracing the regional and cultural aspects that make up a school’s unique ethos, synthesizing these elements with the core goals, mission, curriculum, and program of each school to create the kinds of spaces that engage and inspire students to achieve.

“Whether it was working with a school community or mentoring a colleague, Christine worked tirelessly every day to enhance people’s lives, and to help them create a better future. The K-12 and Perkins Eastman family and schools and communities around the world are better because of her kindness, caring, compassion, and commitment. Her passion will continue to inspire us all.”
– Sean O’Donnell FAIA, LEED AP, K-12 Practice Area Leader

Christine designed schools at all scales and geographies, from small community-based schools emphasizing experiential learning in Downtown Manhattan to the largest school construction project in New York City history to the development of a new model of education aligned with cultural mores for students in Saudi Arabia. What connects them was her devotion to creating distinct and diverse learning environments centered on the student.

Christine’s projects are lauded for being sensitively executed within their complex settings—but equally so for reinforcing the culture and mission of the schools. She enriched the human experience while at the same time helping to significantly recast, and grow, the firm’s design reputation in this ever-important practice area. Her many impactful projects include: 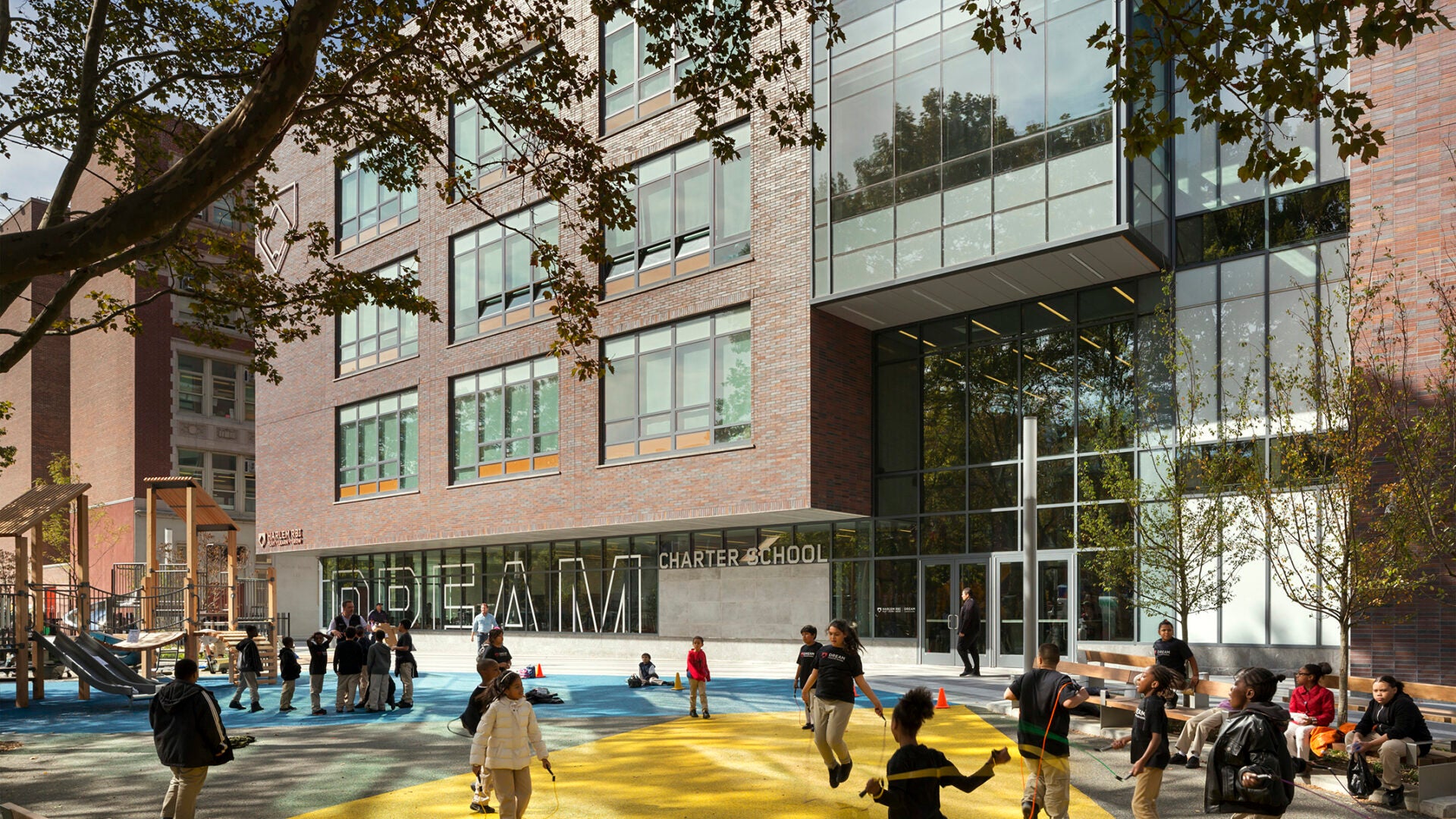 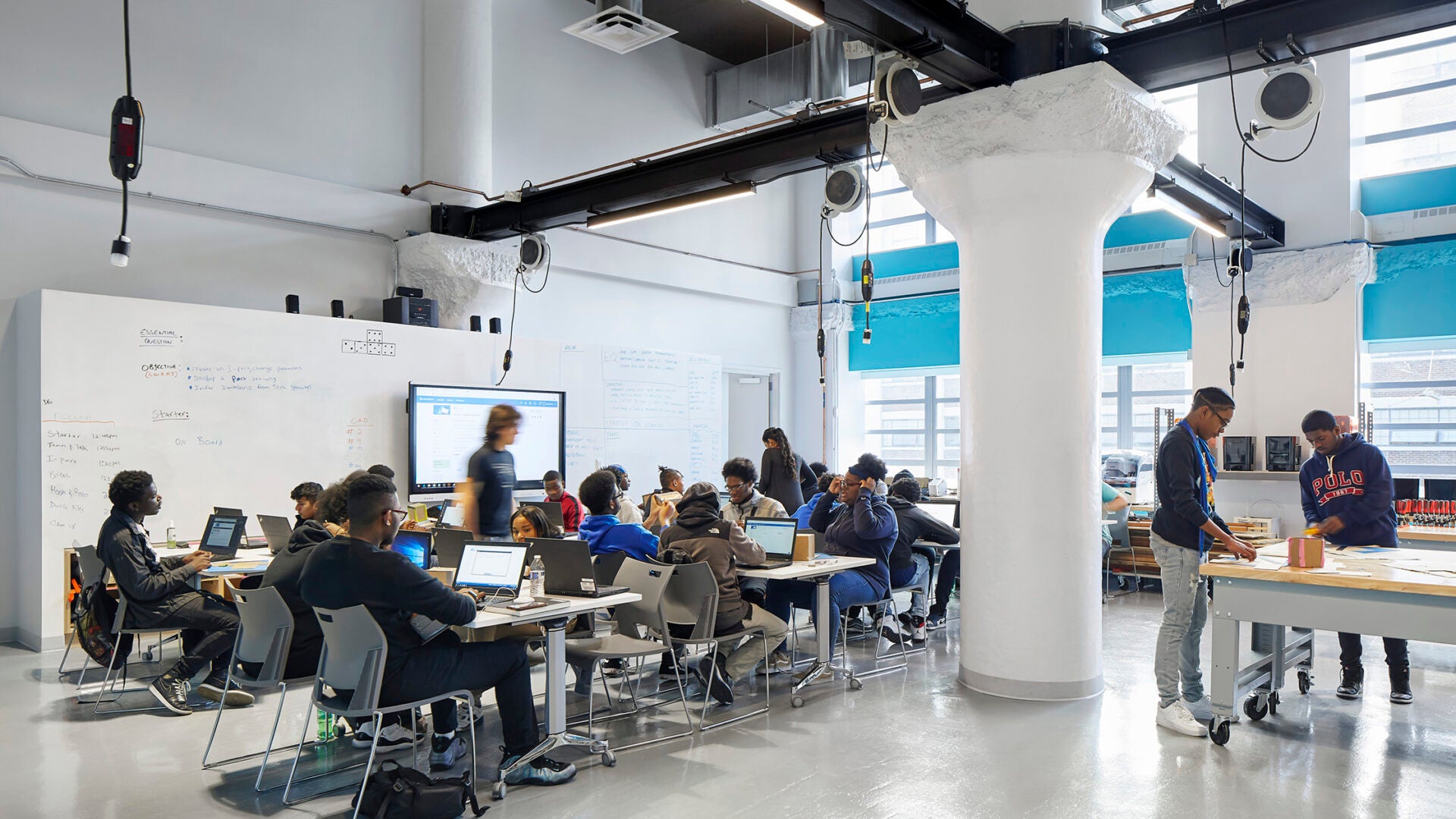 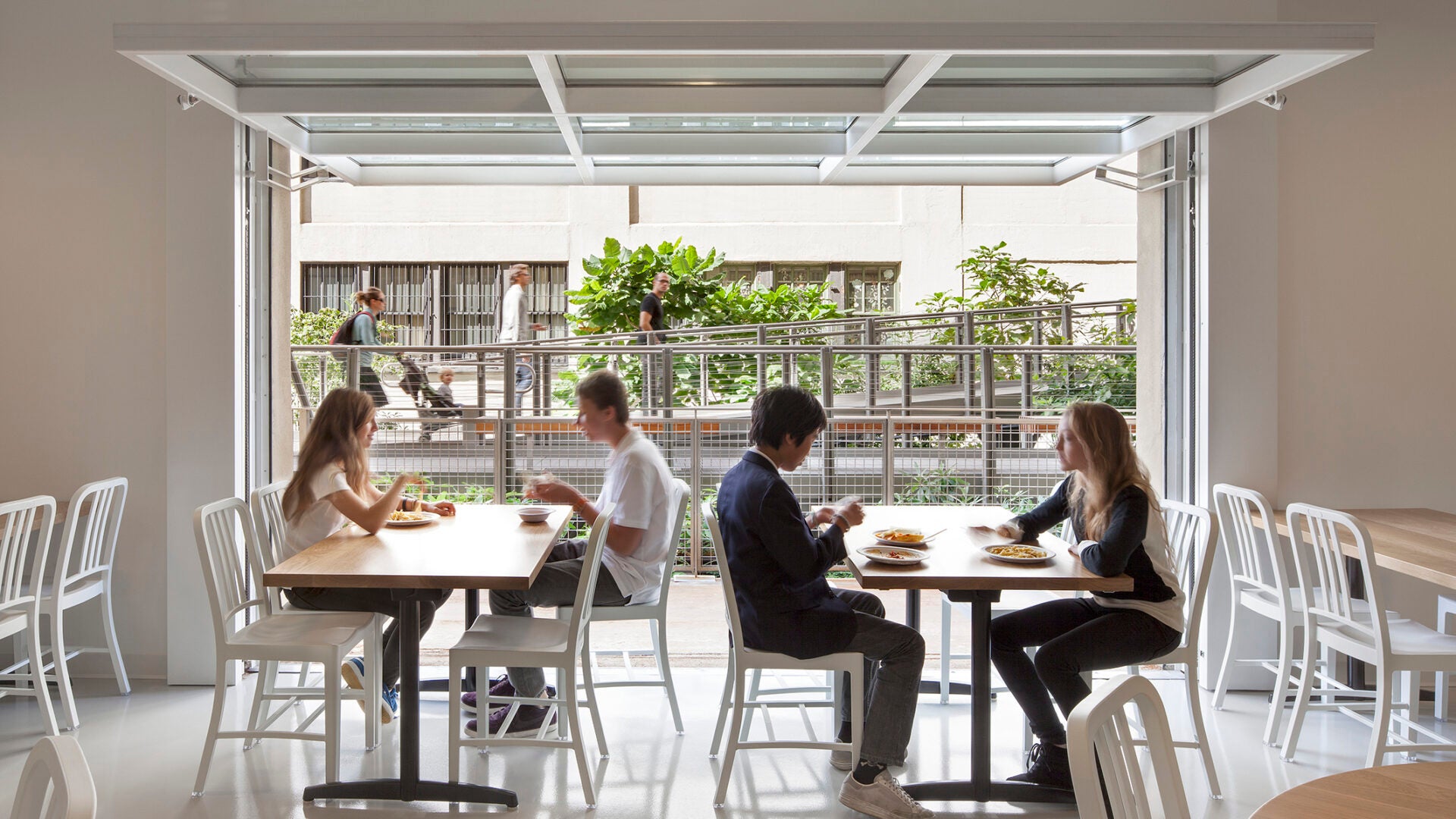 Avenues The World School: New York (Manhattan, NY): Christine led the transformation of an historic Cass Gilbert warehouse overlooking the High Line into a ten-story campus that draws on its unique context while setting standards for the global school of the 21st century. Copyright Chris Cooper Photographer 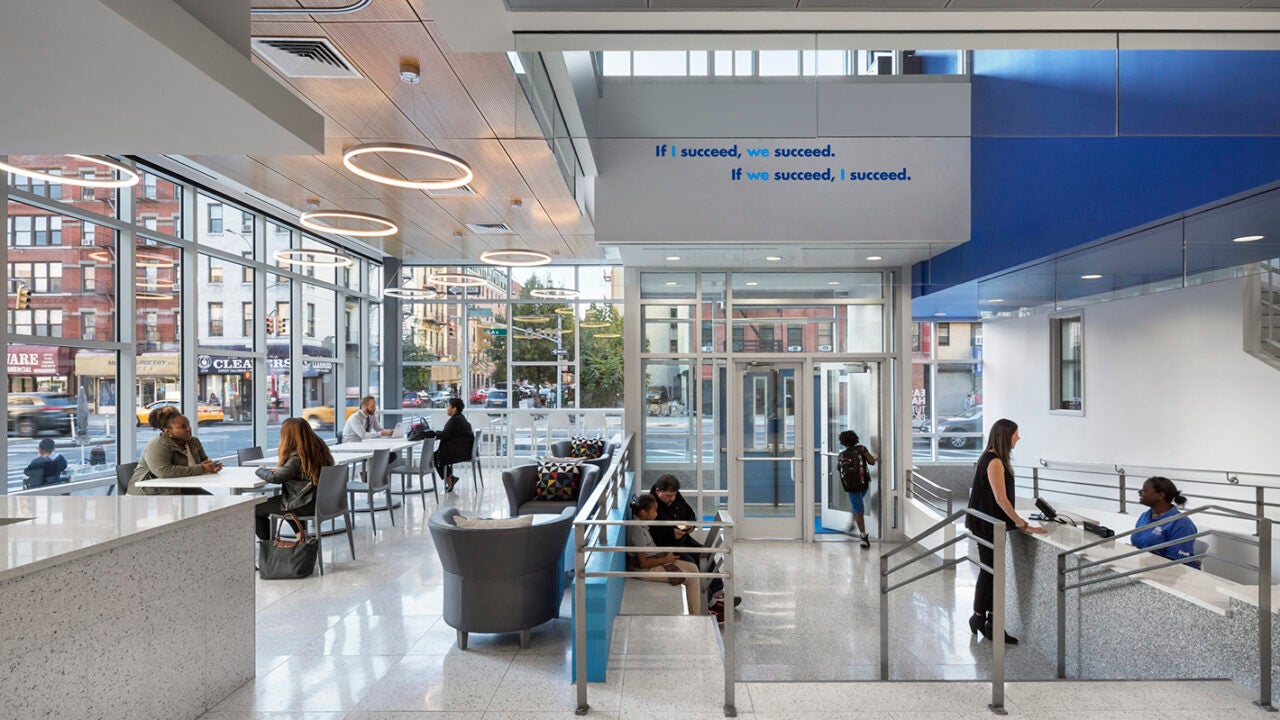 East Harlem Academy Education Center (East Harlem, NY): Christine was principal-in-charge for this flagship building for the East Harlem Tutorial Program, combining under one roof four previously separate programs, including its charter school, for the children of East Harlem and the surrounding communities. Copyright Paul Rivera 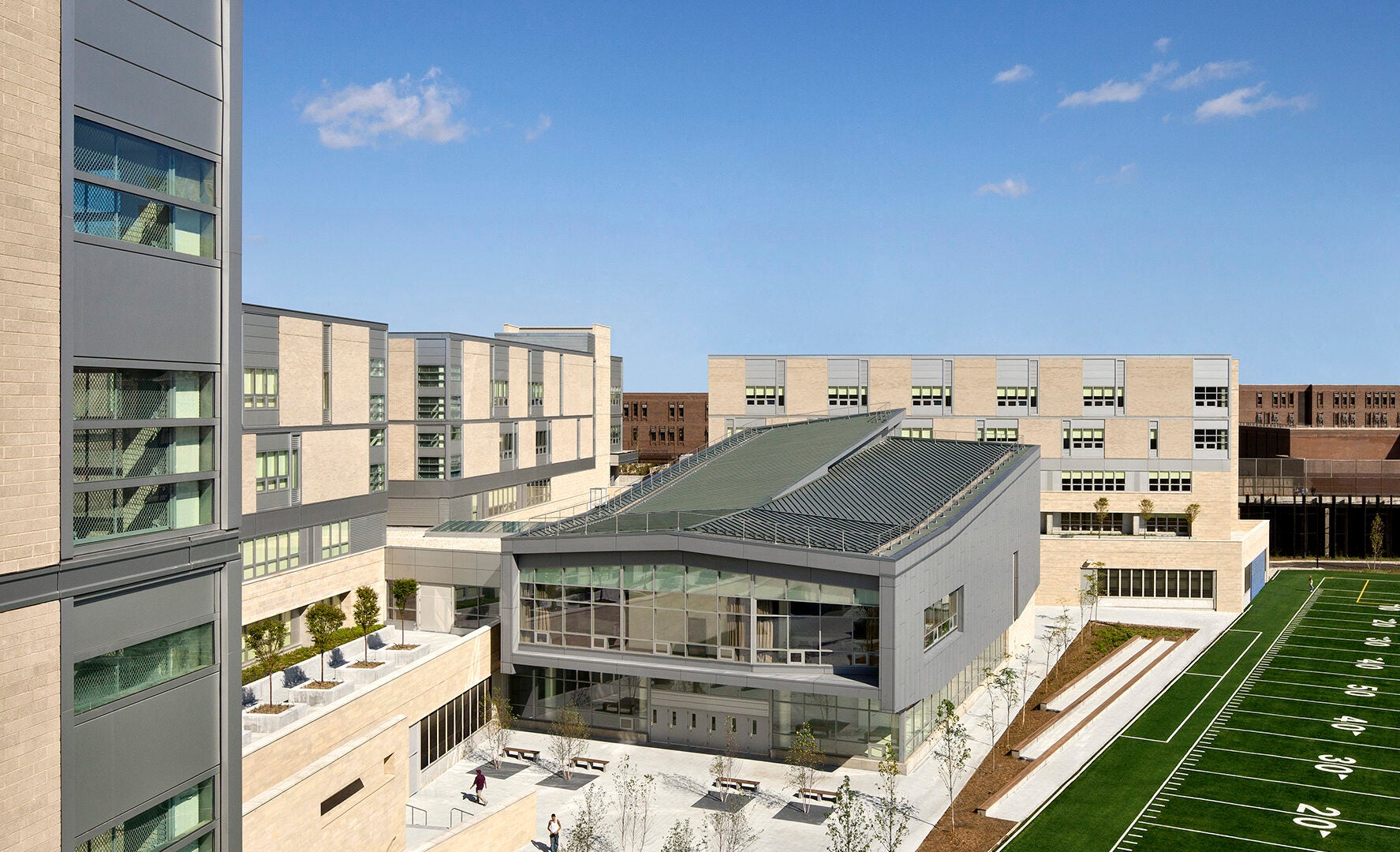 Christine’s passion for learning environments took her beyond the studio; she understood keenly that there were other ways she could contribute, and inspired the same in others.

Her many volunteering and community-building initiatives included:

Christine was also deeply involved in The Peter Schlendorf Foundation, a not-for-profit foundation founded in her brother’s name. Christine worked with the foundation to award more than $150,000 in scholarships that funded a range of unmet needs. Past scholarships have funded a sports wheelchair that enabled a young man to participate in a handicapped basketball league; admission to a science research summer program for a gifted student who couldn’t afford to attend; and an early literacy program at the Dolan Health Clinic.

Her leadership and example galvanized us to be better—to “walk the walk” for our communities, causes, and people we hold dear.

“Cheerleader and all-around everyone’s friend, Christine showed us how to work and play hard, and how to respect and love fiercely. Her example taught us the importance of always trying to give a little more than you think you can, of going that extra mile. Christine inspired a camaraderie that reaches far beyond Perkins Eastman. She was the best and truest definition of a charitable person.”
– Peggy McGrath, Director of Administration

A culture of fun and mentoring

To know Christine was to have an immediate friend, a tireless mentor, and an inspirational example. She brought an incredible spirit of community to the entire studio, the entire New York office, and the entire firm with special occasions, fun celebrations—or, as she would say with a quick shrug, “Just because.”

“Christine was our organizer and the ‘mama’ of the studio. Everyone gravitated toward Christine’s desk where they were always welcomed with a big smile. Our charge is to carry on, in her memory, the celebrations and contributions that she made to our world. We will miss her dearly.”
– Joe Aliotta FAIA, LEED AP, Studio Leader

From dozens and dozens of pies for “Pi Day” (March 14) to International Penguin Day (April 25)—because she loved penguins, we all did—to a treasure chest full of candy for “Talk Like A Pirate Day” (September 19) to year-round sports pools, and much more—Christine brought the fun. In fact, she was an Expert At Fun.

And while Christine loved all sports—there was little debating with her that the best teams on the planet were all-things ‘Cuse (her alma mater), the Miami Dolphins, or the New York Yankees. If you insisted on disagreeing with her, well, she wouldn’t forget but she would forgive.

This penchant for fun and light-heartedness coupled with her unassuming accessibility, devotion to giving back, and grit in spades made her a natural mentor.

Being on a project team with Christine gave younger designers first-hand exposure to her “work hard, play hard” mentality, along with valuable hands-on experience in translating a school’s mission and goals into a space that truly, uniquely, functioned for them. She encouraged her teams to represent the firm at industry conferences, to travel to meet with international clients, to attend client meetings, and to represent the K-12 studio in large mixed-use projects.

The nontraditional mentoring moments were just as important and memorable; she would “nudge” when her teams needed it the most. Like the time when the team had been working the night before a holiday and she treated them to a surprise movie at the cinema across the street. Or tickets to join her at a Yankees game or a tennis match. Bringing coffee. Repeatedly encouraging them to take breaks from the drawing set. Motivating them to play for Perkins Eastman sporting teams and participate with community outreach programs. There are many more examples, but each of these gestures told her team she cared for and appreciated them, and that they needed to take the time to enjoy the moment with one another as well. She had a way of making people feel like they belong, and always have. It wasn’t about the project; it was about the people, and she was a team-builder.

“The most indelible aspect of Christine’s mentorship is the example she set. More than the insightful advice, her ability to calm stressful situations, or her arm always around our shoulders—the manner in which she lived her life makes her such an inspiring mentor. For her entire career, she embodied the values of Perkins Eastman, led by example, and consistently brought joy to everyone in the organization. Christine was our captain.”
– Nel Daws AIA; Jesse Mallen AIA; and Nasra Nimaga AIA, NOMA

There will be pie, penguins, and pirates aplenty—in Christine’s honor—in the years ahead.

In Christine’s memory and name, Perkins Eastman will establish a scholarship fund to help support inner city schools and children—a mission she worked toward in both her professional and personal lives.

“The most meaningful way we can honor Christine—not only her impact on our firm but her friendship and humanity—is to carry her legacy forward. We will take her example and walk the walk—for we hold her dear.”
– Nick Leahy AIA, LEED AP, Co-CEO

Though her absence will be keenly felt, we are all in to keep her spirit alive.

Read more about our Perkins Eastman culture and people