“I used to have a Starbucks name,” says Huiyao Chen, an architectural designer in Perkins Eastman’s Oakland, CA, studio. Chen, who grew up in China before coming to the United States for university, didn’t want to confuse the barista with the pronunciation or spelling of her first name. So she adopted the more American-sounding “Sophie” when she ordered her lattes. Chen’s example was among countless stories of adaptation—small and large, self-motivated and imposed—that Perkins Eastman employees have endured as Asian Americans. From coast to coast, they met in virtual roundtables this month to mark Asian Pacific American Heritage Month and share their experiences both growing up and arriving later in a culture filled with false assumptions about people of Asian and Pacific-Islander descent, and how such typecasting has impacted their careers.

Chen, one of the chief organizers for this month’s programming, told her colleagues that she eventually abandoned Sophie, deciding while she was still an undergraduate that “I’m going to stay with my name, and I’m going to teach everyone to say my name.” Chen staked out her identity in that instance—quite literally—but nearly everyone who participated in the roundtables for the firm’s east-coast, central-region, and west-coast studios shared painful stories about being defined through a set of stereotypes rather than their own backgrounds and actual experiences. “The Model Minority Myth prevents us from being looked at as an individual,” said Shion Iwaizumi, an architectural designer in the New York studio and the other chief roundtable organizer. Here are some of the participants’ comments:

“The first instinct is always to stay out of trouble.”

“People expect you to be really good at math.”

“Asian Americans should be well off.”

“She’s Asian. I know she’s going to work hard and be dependable.”

“One year, I won the NCAA March Madness pool. Everyone was shocked.”

Imparting inherent traits to an entire race of people is damaging not only to those who don’t possess them, participants said—God forbid you get a C in math or you don’t play a musical instrument—but it also blocks professionals from being considered for leadership under the bravado-laden definition of American success.

The Model Minority Myth perpetuates the impression that Asian American professionals are hardworking, keep their heads down, do what they’re told, and stay out of the fray. Like most stereotypes, it’s rooted in some truth—there are very real differences between how children are raised to succeed in Asian and Western cultures. Each roundtable began with a comparison of proverbs to drive the point: In America, the squeaky wheel gets the grease, while in Asia, the loudest duck gets shot.

“Speaking was not a big part of my education,” said Chen Zhao, an associate in the D.C. studio. It’s all about solitary study, with little focus on communicating with others. Your work speaks for itself, in other words, and self-promotion is considered not humble. “In many cultures, Asians prefer to be tapped on the shoulder rather than ask for advancement,” said Chuanhui Wu, an associate in the Chicago studio who was raised in China. “It’s so anti-Asian to say, ‘Look at me!’ ” added Aline Funari, a senior associate in the Pittsburgh studio, and a first-generation American whose parents are Taiwanese and Vietnamese. Even though she was born and raised in America, where one might be rewarded for speaking up and asking for things like job promotions, that approach was anathema to how she was raised at home. “It doesn’t feel right to have to ask for it,” she said.

For those reasons, many roundtable participants described professional experiences where their hard work was at once relied upon yet unacknowledged when it came time for promotions or raises. That pattern creates a cycle where an absence of Asians at the top discourages ambition from below. “You don’t aspire to what you don’t see,” said Fawzia Ahmedali, an architect and associate principal in the D.C. studio. “For the first many years, I didn’t believe it could happen” that an Asian woman could rise up the ranks in a large firm like Perkins Eastman, she explained, yet the studio’s managing principal, Barbara Mullenex, offered her a new perspective. Although she’s not Asian, Ahmedali said, “Having a strong female leader has really changed my attitude.” 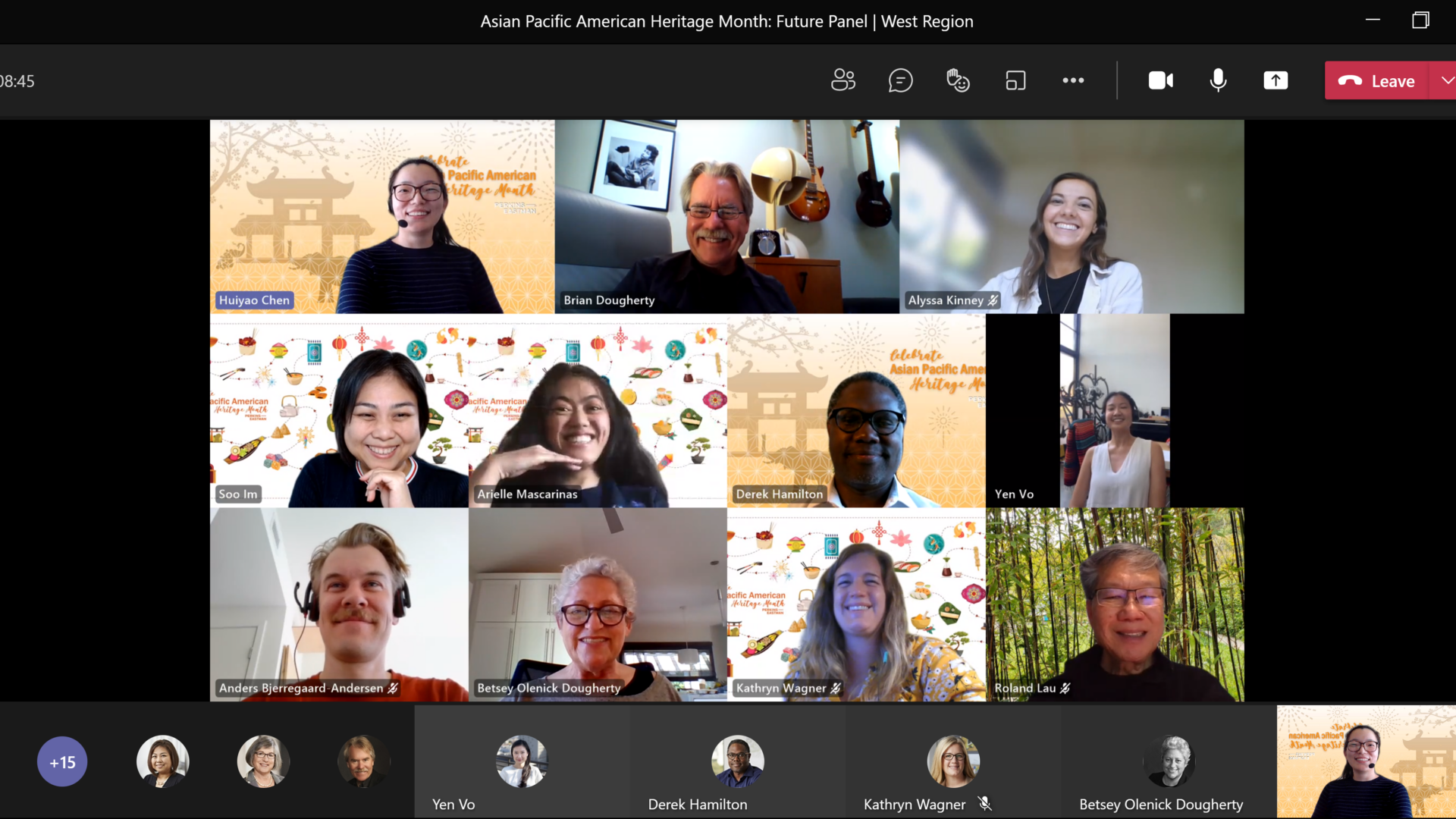 Employees gathered this month to “acknowledge the struggles, challenges, and disadvantages faced by Asian Pacific Americans and bring relevancy to present-day biases experienced in today’s workforce.”

By virtue of pursuing a career in the United States, many roundtable participants—even those born and raised in the States—described conscious efforts to speak up despite it feeling unnatural or inauthentic. “In India, for a certain generation, you were raised to be humble,” said Buvana Murali, a senior associate in New York, but at grad school in the States, she added, if you don’t claim your work, it doesn’t get noticed. Several offered approaches to work around the disconnect between how you’re raised and how you get ahead. Ramu Ramachandran, an associate principal in the Chicago studio, said volunteering in the community helps immensely. Get on the board of your local temple or place of worship, or the PTA, or any other local organization that can benefit from your expertise or ideas, he said. “It’s a great way to reinforce one’s own personal sense of worth. You’re meaning something to somebody,” he said, and participating in community meetings is good training ground for speaking in public.

If you have trouble advocating for yourself, said Soo Im, an associate principal in San Francisco, form networks where you all can advocate for each other. “That feels more natural,” she said, “if we get in the habit of promoting each other.”

As a Black American raised in the South, Derek Hamilton shared a similar aversion to self-promotion. Growing up, said Hamilton, an associate principal in Los Angeles, “It was all about respect—only speak when you’re spoken to; if you don’t have anything to say, don’t talk.” He found an effective way to “speak,” then, when it was time for annual reviews. He had saved all the complimentary e-mails and thank-you notes about his work and contributions to the firm, which made the case on his behalf when he sent them on to his supervisor. “There was no argument about adjustment in fee. It was all documented,” he said.

Roland Lau, an associate principal in San Francisco, said one shouldn’t underestimate those who appear quiet or shy. He noted examples of past colleagues who, despite their quiet nature, possessed talents that ultimately took them to the top ranks of their firms. “When someone who looks a little like you and shares a commonality that you can relate to, it can influence what you aspire to,” he said. “We as architects need to lead by example and be advocates for fellow staff who might be overlooked, so they can feel comfortable in developing their own potential as they gain confidence in their skills, abilities, and experience in the process. If we remain too much in the background, we might all have a tougher time moving ahead in our profession.”

During a panel discussion with New York Principal Mindy No, AIA, and Gordon Chong, FAIA, last week, AIA Fellow Rosa Sheng shared an impactful story about how Apple founder Steve Jobs became her champion when she needed one.

Sheng, a principal at SmithGroup in San Francisco, and its firmwide director of justice, equity, diversity, and inclusion, spoke of an experience early in her career when she worked on a prototype for the glass stair and floor system at the first Apple Flagship retail store in Soho, NY, when co-founder Jobs was its CEO. Sheng was successful for advocating that her name be included on the patent, she explained, “because no one would otherwise believe an Asian woman was involved with it.” Jobs continued to work with her firm during his second tenure at Apple, and she would become the project manager for the glass cube that encloses its flagship store on Fifth Avenue in New York. After the store’s opening, Jobs insisted she come to a dinner that evening, even though she tried to decline—twice—because her husband and baby daughter were with her. “It was his way of being my champion,” she said, adding that he also had a consistency at Apple prototyping meetings for the new flagship stores to ask her opinion on different design matters. “He believed in my potential, and that was shown through his invitation and his persistence. We all deserve a seat at the table, and we all deserve champions.”

“Just doing the project work isn’t enough,” said Mindy No. “There’s not enough focus on the soft-skill sets of relationships and leadership. In order to have a seat at the table, you need to have a voice at the table.” At Perkins Eastman, she continued, “I hope we can make a difference by continuing to tell our stories and leading.”