Reporting Back From the AIA Women’s Leadership Summit

17 women from Perkins Eastman attended the conference in San Jose, CA—and came back ready to share their inspiration.

The orange bags stood out.

Among nearly 750 professionals who attended the American Institute of Architects’ Women’s Leadership Summit (WLS) in San Jose, CA, this year, 17 of them were women representing Perkins Eastman—and carrying those signature totes. “We got compliments and jokes that we were all matching,” said Sarah Oakes, a designer in the Boston studio. But even more than a visual impact, the size of the group made for a record presence there. “The value of sending a cohort of representatives from Perkins Eastman boosted both our visible attendance there and allowed a large number of us to meet one another and build camaraderie within our own group,” said Emily Pierson-Brown, the firm’s new PEople Culture Manager, who works in Pittsburgh. The women used their bags to find each other in the crowd so they could meet for each day’s meals, but the cohesion is likely to last long past their return. They’ve already set up their own Teams channel and plan to meet monthly. Because nearly half of them were promoted this month, Pierson-Brown adds, “part of the reason we want to gather and be a cohort is to support one another in our new responsibilities and roles.” 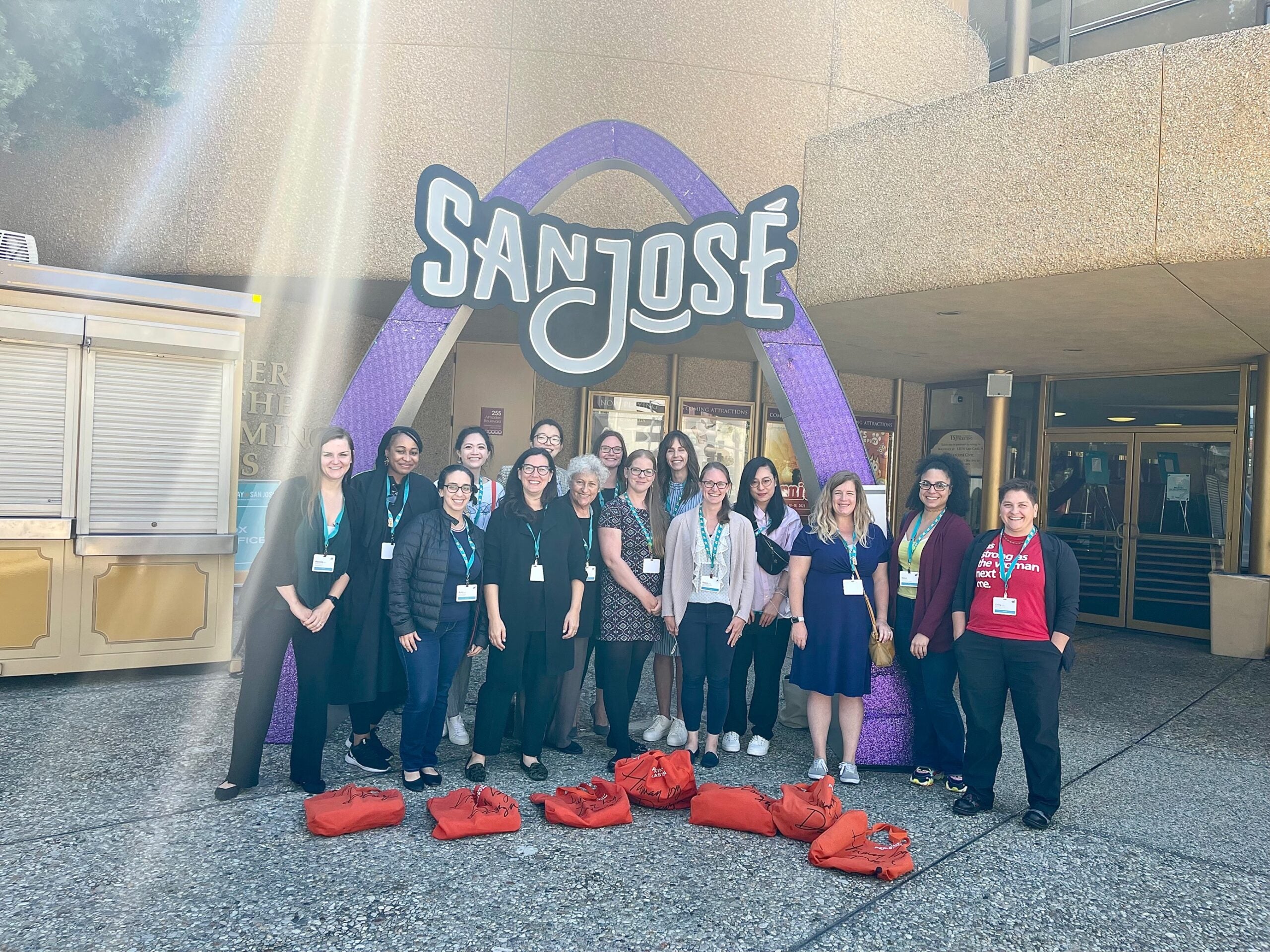 Nasra Nimaga, Senior Associate, New York (sponsored by the AIA in its Next 2 Lead cohort)

Pierson-Brown and her colleagues gathered last week for an initial meeting with the firmwide coordinators of the Women’s Leadership Initiative (WLI) to follow up and share their thoughts and takeaways from the four-day conference, which included tours throughout the region and talks on sustainable practices and material health; generational wealth gaps; arts-driven design; and the power of public spaces.

On many levels, the participants agreed, the conference symbolized re-energized, industry-wide recognition and support for women and other diverse professionals in architecture, urban planning, economics, real estate, community design, engineering, technology, and construction. “It was nice to see women in other parts of the industry that you don’t really see” every day, Oakes said. “I don’t think I’ve ever met a female group of structural engineers here in Boston. I’ve only ever worked with guys, so it was nice to see other parts of the industry—not just architecture—that are getting more women represented in leadership roles.” 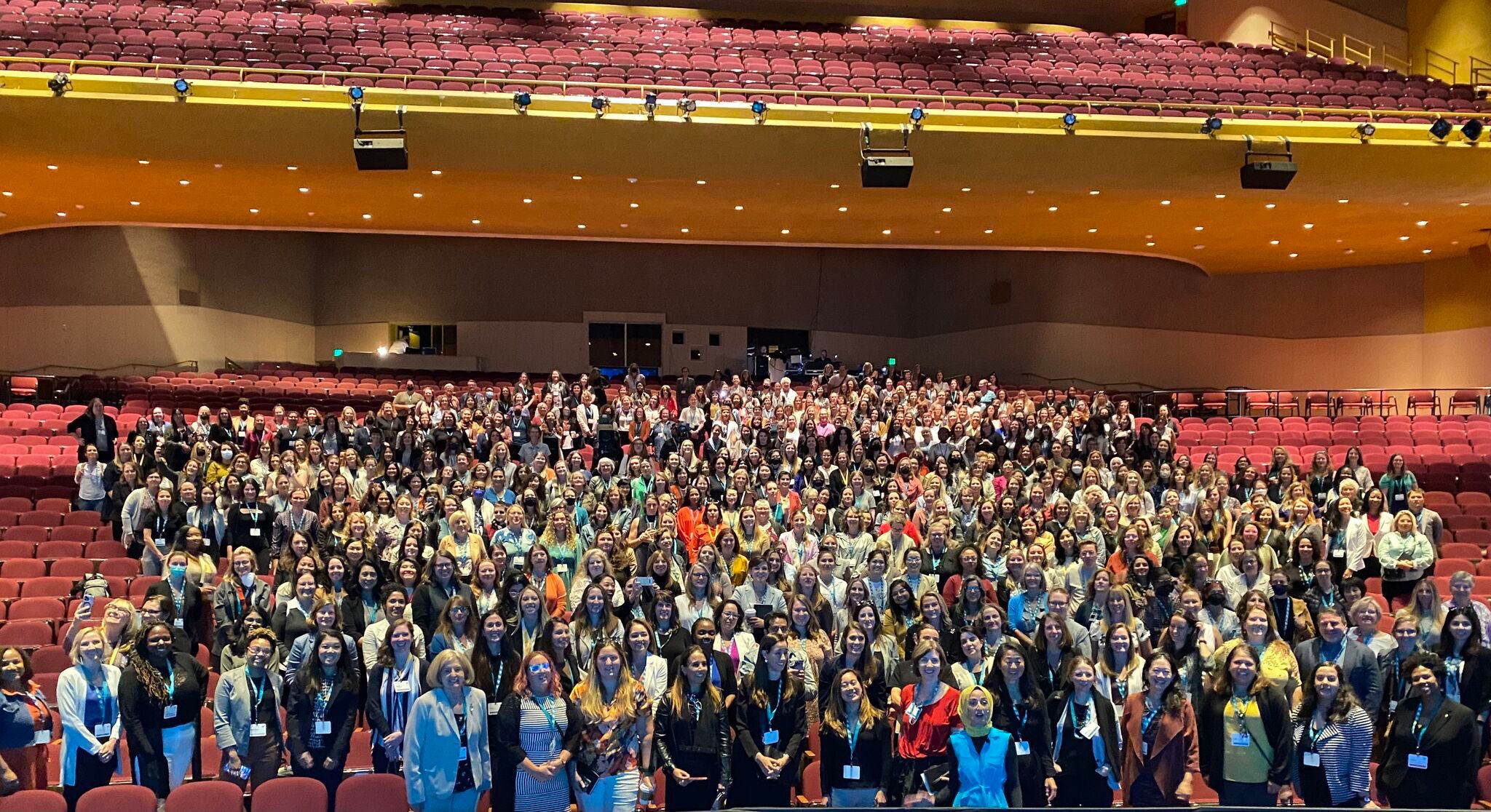 Most of the 750 conference-goers pose for a group picture at the San Jose Center for the Performing Arts, where the Women’s Leadership Summit took place Sep. 28-Oct. 1.

For the first time ever, this shift in leadership focus includes the AIA itself, where three women now serve at its helm: Executive Vice President and CEO Lakisha Ann Woods; First Vice President and 2023 President Emily Grandstaff-Rice; and 2023 First Vice President/2024 President-Elect Kimberly Dowdell. “The AIA—the old men’s club, which is why I joined it as a kid—is now being run by women,” said Principal Betsey Olenick Dougherty of the Costa Mesa studio. Even better, she noted, is that our own Frances Halsband of Kliment Halsband Architects—A Perkins Eastman Studio is the incoming Chancellor of the AIA’s College of Fellows. Ticking off these new roles, Dougherty said, “Boom-boom-boom-boom-boom—pretty cool!”

The WLS attendees expressed mutual wonderment at the powerful stories they heard from women who described the tough roads they pursued to reach their professional goals. “They were just unbelievable stories of perseverance and strength,” Dougherty said. One dramatic example was Navajo architect Tamarah Begay—one of only eight Native American women architects in the US—who told the audience she went to architecture school despite her father’s protestations because there were no Native women that he’d ever seen in the profession. “My family didn’t know what I did. They couldn’t see themselves reflected in my work,” she said. She started her own firm in 2012 because she grew weary of male peers asking her to take notes or pour coffee during meetings. Begay’s firm, Indigenous Design Studio + Architecture, employs a 100-percent indigenous staff, many of whom are the first in their tribes to become architects. Their mission is to bring quality design to underserved tribal communities in New Mexico and beyond. 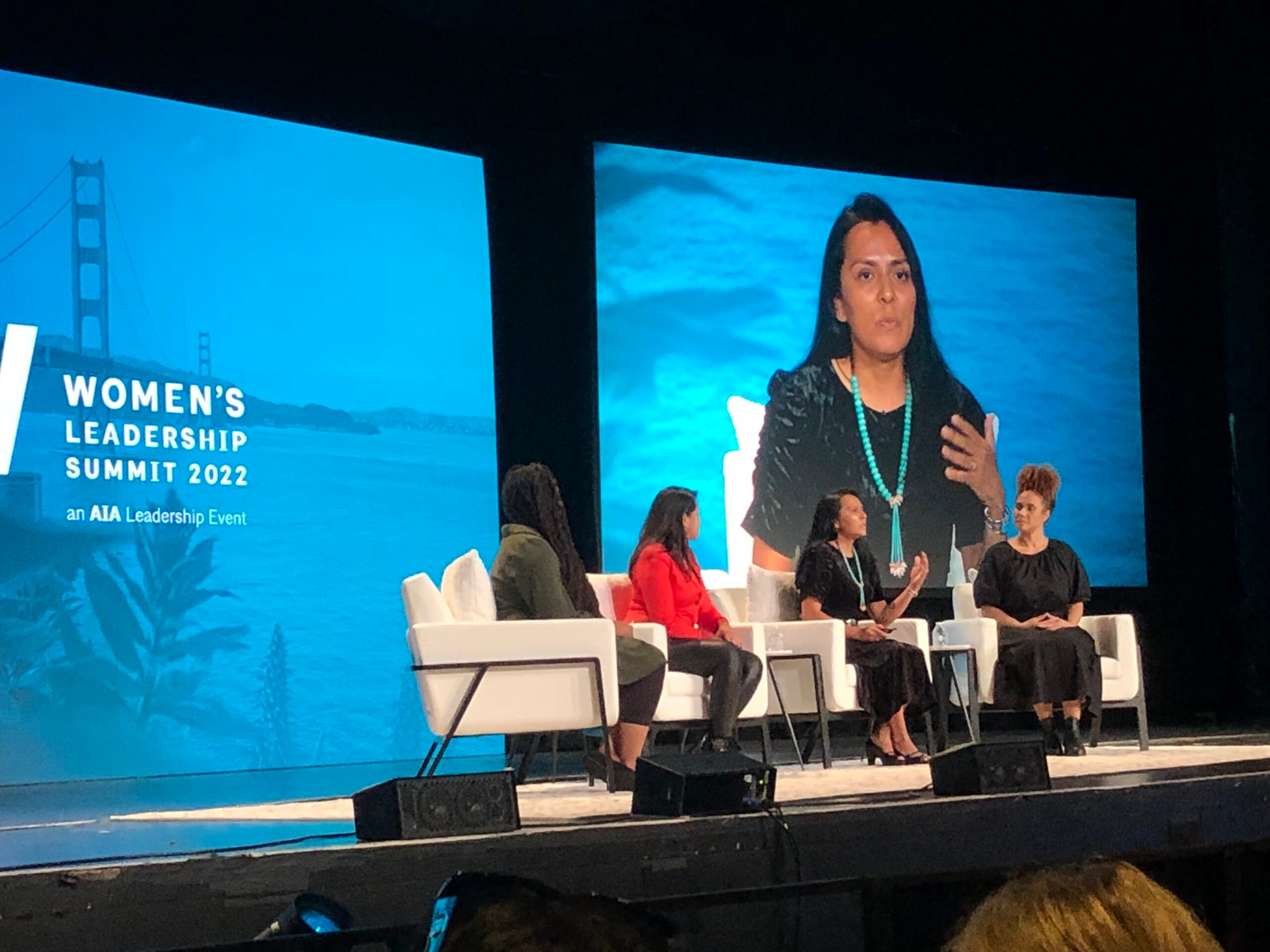 Tamarah Begay is featured on the big screen during a panel discussion at the Women’s Leadership Summit. She spoke about her road to architecture along with New York architect April De Simone, at the far right.

April De Simone, an African American architect from the Bronx, related her experience of having to start caring for her family at a young age after her father died of a drug overdose and her mother died soon thereafter. “Part of understanding the built environment is in my DNA,” she told the attendees, because it can literally frame the human experience, such as her own loss and hardship in the house where she grew up, and more broadly, in living in a redlined neighborhood that was the foundation for much of its poverty and lack of access to good education. De Simone co-founded a socially minded company, Designing the WE, that offers design, policy, and strategic planning services to create more equitable communities. Perkins Eastman Principal Leslie Moldow, who works in the San Francisco studio, marveled at Begay’s, De Simone’s, and other speakers’ collective passion. “People have tailored their professional lives to give back and to act on a set of values, and that was really powerful,” she said. 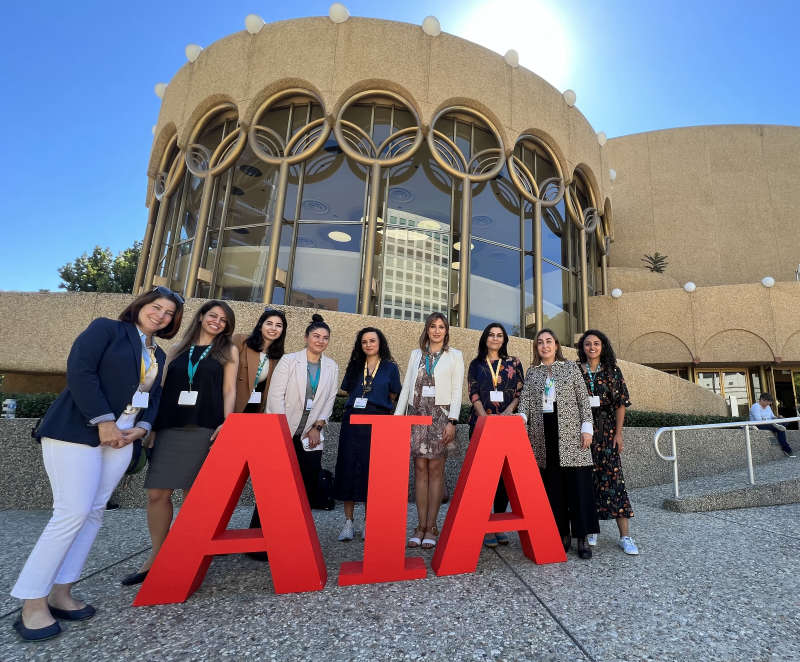 A group of Iranian women attended the conference, providing an inspirational presence at a time when women are battling for their individual rights back home.

The work-life balance challenge took up much of the post-conference WLI conversation, where nearly everyone weighed in on how the traditional studio format needs to change—especially for women who more frequently have to juggle work with raising children and caring for aging parents. “A lot of us don’t really realize we’re burning out until we’re burned out—and we need to go home and hide for a few days and not tell anybody,” Oakes said. An app created for the conference let attendees comment and ask questions in real time during each session; an emblematic one for the mental-health session was, “Have we seen a shift in academia toward better studio culture and mental wellness?” Kendall Tynes, creative director of Frank—A Perkins Eastman Studio in New York, said “this particular session was so key for all of us that we felt like, ‘Wow. I wish we could have the entire firm listening in.’” 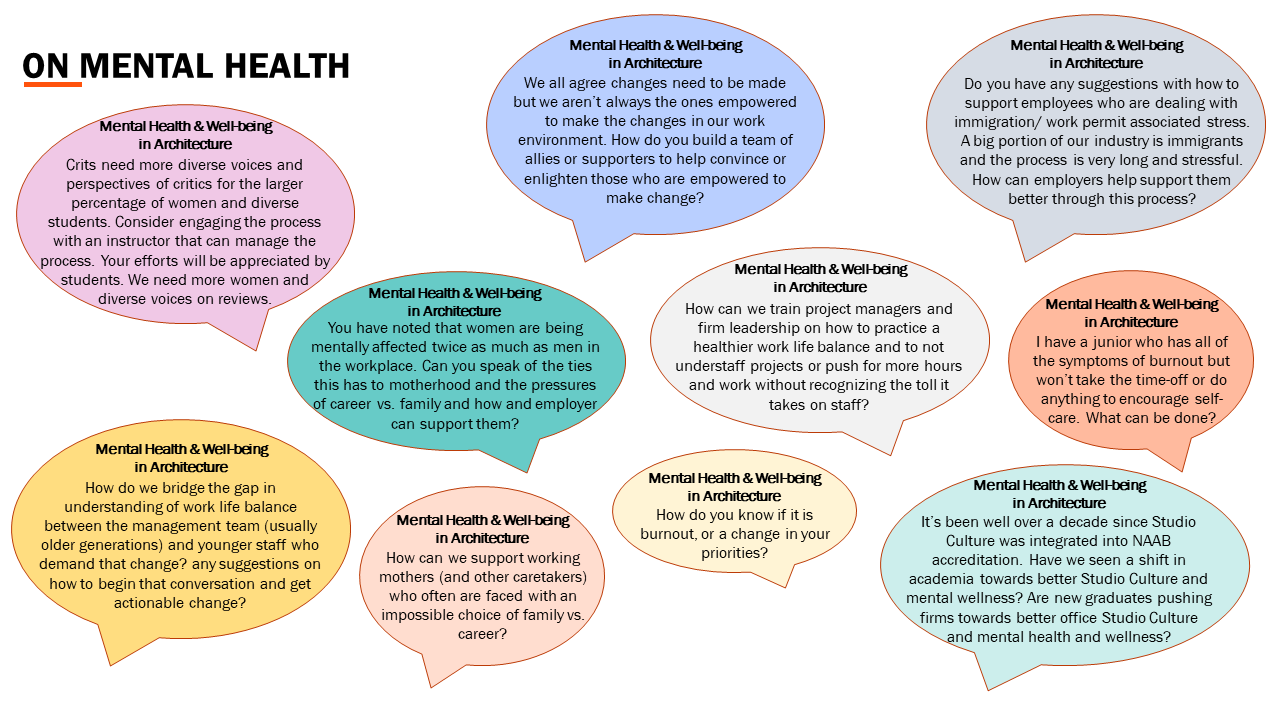 Comments and questions during each session flowed into an app real time, so everyone could see the discussion on their phones. Graphic by Sarah Oakes

Of particular note was the strong presence of architectural students and emerging professionals who don’t agree that entering the profession should mean a career-long commitment to regular all-nighters for days on end to complete projects under rigid deadlines. “How can we train project managers and firm leadership on how to practice a healthier work-life balance and to not understaff projects or push for more hours and work without recognizing the toll it takes on staff?” Oakes asked. “This new generation [is saying] ‘We’re not OK with that. We’re not going to tolerate it. We’re going to push back against this whole culture of architecture.’”

On that point, Pierson-Brown brought up a conversation she’d just had with members of the Costa Mesa studio about the philosophy of leadership. Rather than the top-down control that studio culture represents, leadership is moving in the direction of “how can I help, rather than how can I control. It’s giving people freedom for professional development, letting staff choose where to invest time and the giving them resources,” Pierson-Brown said. Kathryn Wagner, one of the firmwide WLI leaders who also attended the conference, said several speakers urged the gathered industry professionals to set new standards for leadership. The movement is already afoot at Perkins Eastman. “We’re pretty close to adopting that mindset,” said Wagner, who works in the Oakland studio. “This approach ties into our WLI mission, vision, and goals. Most of our West-Coast offices try to empower people to search for something that resonates with them and then give them the tools and guidance to achieve success on their own terms.” 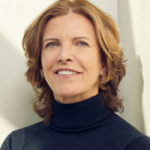 Architect Jeanne Gang, who gave the closing keynote address at the conference, presented her corporate flow chart for Studio Gang in Chicago. It resembles a tree rather than a mountain, with the firm’s values providing the roots and her name at the base of the trunk, holding things steady as everyone else “blossoms” up and out. “She doesn’t see herself at the top at all,” Oakes said. “It’s a nice way to describe how she runs her firm.”

Gang spoke about pay equity as well—a topic Perkins Eastman has also been addressing in recent years. Studio Gang conducts a twice-yearly salary review to ensure that women and men in similar positions are compensated alike. “It’s not a one-time, find the gap and fix it,” said Emily Perchlik, an associate principal for VIA—A Perkins Eastman Studio in Seattle. “She compared it to counting calories. It’s going to constantly be an analysis, because men will always ask for more pay.” Gang, who has an office in Paris, must follow European regulations that mandate firms post their employees’ salaries, broken down by position and gender, and also include salary ranges with job listings. Those who attended the summit agreed it would be a great advancement to adopt such practices in the US. “Benefits are also part of the conversation,” Pierson-Brown said, who also noted there are inequities between job types, such as architectural and interior design. “This is a bigger, ongoing question.” 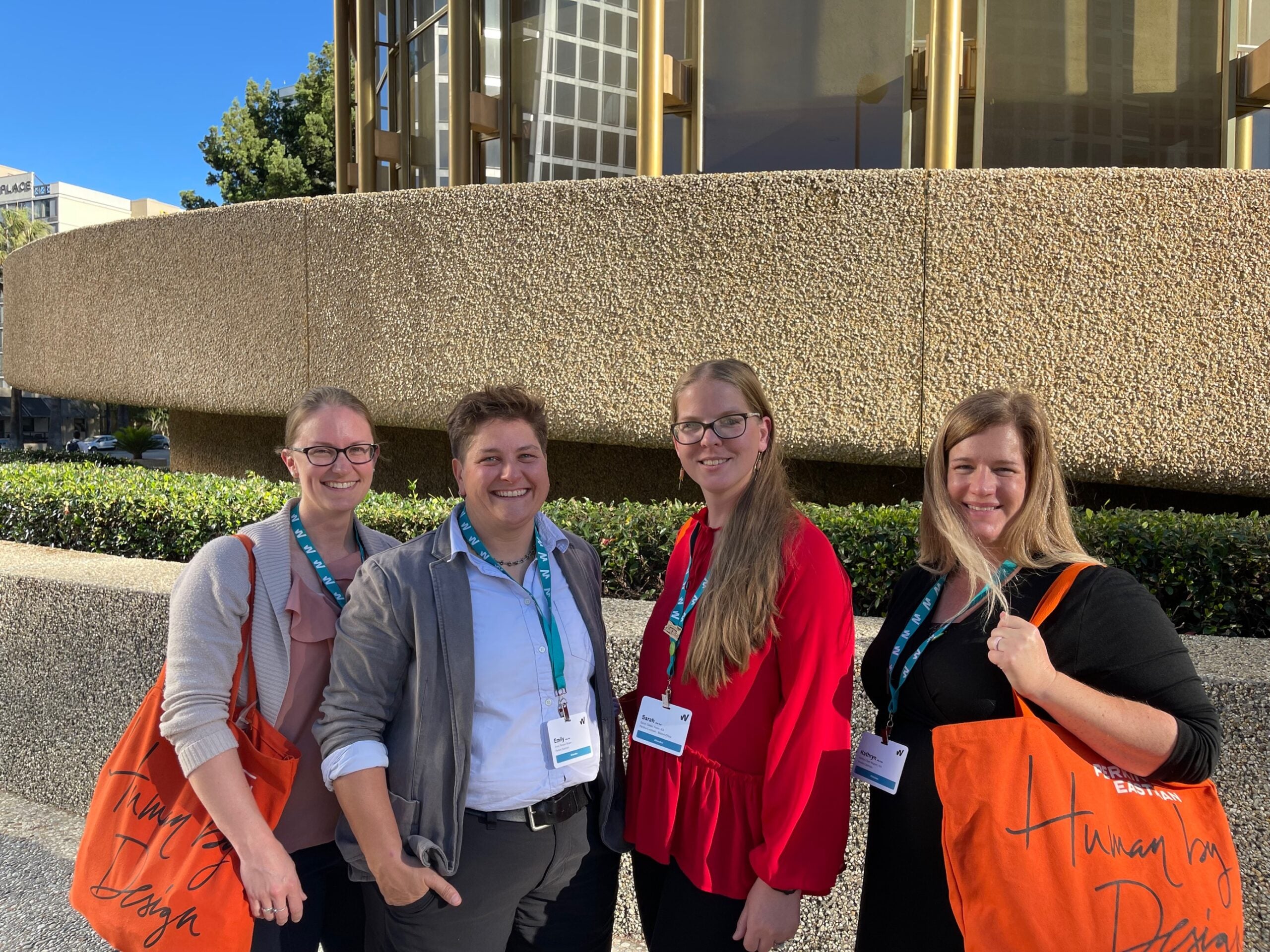 The women who gathered for their initial post-conference meeting are eager to dive into such questions in the coming year, plus other topics that arose at the conference, such as innovative new technology, the history of place, and creating sustainable neighborhoods through resilient design.

At the national level, the AIA announced it will begin holding the WLS annually rather than every other year, as it’s been doing since 2009, to align better with its leadership’s priority focus on improving racial and gender equity in the profession. “One of the biggest things for me was how intentional—racially, ethnically, and otherwise—the diversity was,” both among the attendees and the presenters, Pierson-Brown said. The WLS group has just begun planning presentations to wider Perkins Eastman audiences about the conference and the many topics and issues that were debated—with the hope being that even more PEople—of all genders—will sign up and attend next year’s gathering in Boston.