The Power of Suggestion

PE's home of the future offers high- and low-tech "nudges" toward better living. 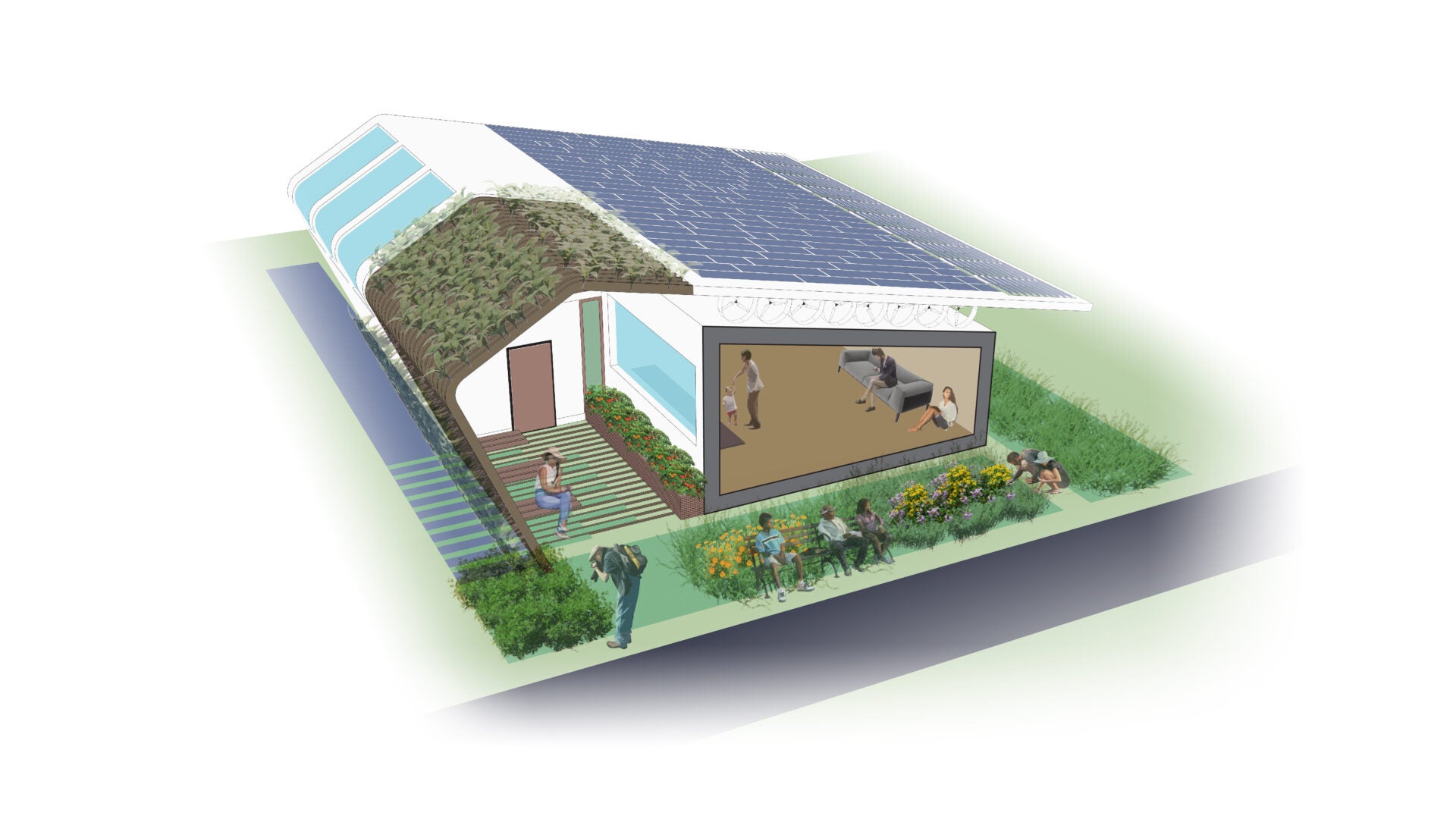 By avoiding the kind of interruptive notifications we get on our devices—Time for your meeting! Time for the gym!—and incorporating subtle technology to “nudge” us into healthier living, Perkins Eastman’s home of the future was highlighted in Fast Company recently. The Perkins Eastman Nudge Home concept was the result of a creative sprint between Co-CEO Nick Leahy,  Diaa Hassan and Pablo Cabrera Jauregui, and Communications Associate Melissa Nosal. “I was nervous that we weren’t going to get the concept to Fast Co. in enough time to make it to the finish line,” Nosal said.

The subject line seemed innocent enough when the email popped into Nosal’s inbox on a Friday afternoon. “Hello from Fast Company—Home Concept?” it said. What followed, however, was a challenge to return a fully-formed, future-home concept—with renderings to back it up—within two weeks. Despite the tight turnaround, Leahy said, “We were intrigued. We thought it would be a fun exercise.” Hassan is a facile thinker and would be quick to get the ideas flowing, he explained, while Cabrera Jauregui, with a specialty in computational design, could execute the vision.

The assignment was to devise a home—“the bolder the better”—with design and technology that would be feasible in the next five to ten years. Leahy started the process by invoking the architect Cedric Price, who famously said in 1966: “Technology is the answer, but what was the question?” The team would have to come up with the right questions before dreaming about a future design that could answer them. Three queries emerged: What to do about working at home for hours on end without a break? How do you get your kids off their screens? And the age-old quandary: What’s for dinner?

Hassan started with a basic Google search: What’s the home of the future? “Everything that shows up is very similar. It’s a whole bunch of notifications—on your phone, on your fridge—in a very overt and obvious way. When you’re being overwhelmed like that, you just want to turn it off. [Your home] isn’t just this big phone. I don’t want to live in a house like that,” he said. Instead, he reasoned, “What can we do so it’s centered on the user of the house and not just the capabilities of the house?” Hassan looked outside of architecture for some answers, and remembered a book he’d read called Nudge: Improving Decisions about Health, Wealth and Happiness by Richard Thaler and Cass Sunstein. Based on behavioral economics, the book argues that we’re not always going to make choices that are inherently beneficial to our health or well-being. There needs to be a “nudge” to push us in the right direction. Why, then, can’t we use technology in the home as a nudge rather than a nag? Using that premise as a lens, Hassan revisited the team’s original questions about life in the modern home.

The Work from Home Dilemma

Most of us have been working from home since the pandemic began—and we’re likely to continue in some kind of hybrid format even after it’s over. “It’s here to stay; it’s not going to go away anytime soon,” Hassan said. “It has its benefits but it also has its problems. Everything’s blurred, there’s no time that you can go to lunch or you can go for a walk. This is where the idea came from.”

Filled with sensors that can detect how long you’ve been sitting, The Nudge Home activates a “vibrance filter” within the window glass that enhances the view outside—enough to catch your attention and entice you to go get some fresh air. “It doesn’t tell you what to do but… It thinks of you!” the interactive .gif says.

In his online searches, Hassan had come across smart homes that project exotic scenes in the window like a tropical beach or snowy mountaintop. Not necessary, he concluded: “You have the outside. Maybe you just need to brighten the outside a little bit to make it more vibrant. It’s like an Instagram filter.”

As the mother of two, Nosal raised this issue with the designers—how do you get your kids off their devices? The answer, Hassan said, is “integrating natural play into digital game play.”

He used Nosal’s daughter Izel, 7, as the child in this scenario, where the house has detected that she’s gone past her recommended screen time. “Time to activate Nature Play mode,” the .gif explains, whereby a bank of large media-display windows scans the views outside until it finds “nature-play sources” such as birds in a tree. The screens project images of those birds (clickable in case Izel wants to read about each species), along with a diagram of a nest and instructions to build one using existing materials at the local park. If she builds one that’s big enough for the birds, the screen promises, the “Super Bird X-15”  feature will be unlocked the next time she plays her computer game.

Thaler and Sunstein’s book explored default bias, the tendency to opt for something that’s most convenient when faced with multiple choices. Hassan applied this bias to dinner.

Despite the millions of recipes accessible online, we’re all likely to default to the most familiar dinner dish or the easiest option, like that pizza in the freezer. The Nudge Home leverages this bias and creates a new default, using sensors in the garden outside and also in the fridge to come up with a novel recipe that appears on the refrigerator door. “Hassle-free, fresh dinner for the win,” says a word bubble coming from the fridge. Our homeowner didn’t have to do her own food inventory or even search for a recipe. As Hassan described it, “this is a chance for us to make the default option the best option.”

The design team went beyond individual features to place Nudge Home in the context of its community, at which point Cabrera Jauregui stepped in. “The vision of the future is how to implement this technology harmonically,” he said. “The way we design houses right now, we’re using photovoltaic panels to generate electricity, but that’s only part of the solution.”  If the house is to be net positive so it can consume the energy it produces and have enough to give back to the grid, solar panels are but one piece of the puzzle. “Architecture is a complex, multi-variable problem. If you just concentrate on one technology, you’re forgetting the other possibilities.” 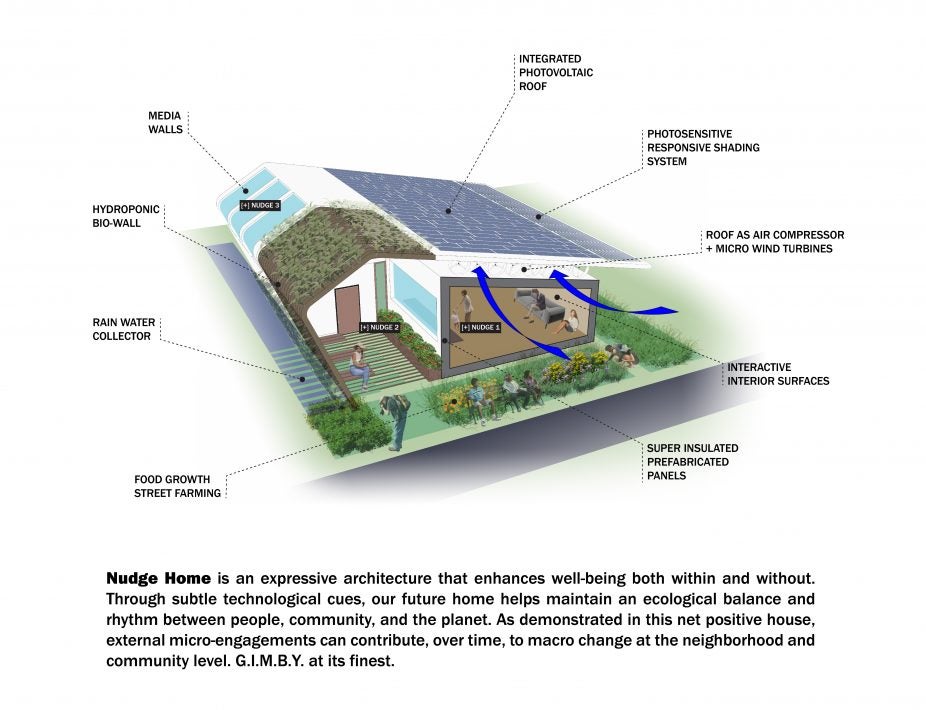 Cabrera Jauregui designed two roofs, in essence: An integrated photovoltaic expanse that’s suspended over the actual roof. A grid of mini wind turbines is tucked in the space between them, adding a second energy-generating source to the design. The plan also places the gardens in front, inviting neighbors to stop and look and also providing food for the family and neighbors. A hydroponic bio wall forms a pergola-like structure over the front walk that produces shade and filters the air. A pathway down the side of the house, meanwhile, doubles as a rain water collector.

Of all these elements, Cabrera Jauregui said, “It’s a harmonic combination of low-tech and high-tech that comes together to resolve a design problem in an integral way.” The concept moved Leahy to reframe NIMBY, or “not in my back yard,” a familiar—and negative—term for homeowners who don’t want anything new coming into their neighborhood. Now, it’s GIMBY, or “green in my back yard,” he said, a model that others will surely want to follow.

The team took its future-home assignment—that the technology should be available within five to ten years– seriously, inventing concepts that could easily be in play within the next decade. They incorporated their technological musings within a design that’s here right now. “The home of the future doesn’t have to be all about technology,” Hassan said. Place the kitchen window in view of the garden, or run an open stairway against a glass wall so daylight can still fill the home on multiple levels. Those basic layouts will nudge us to be healthier, drawing us out into the garden, and making a pleasant experience out of climbing the stairs. “The whole idea of choice architecture comes from what we do already. We do it intuitively. We make these decisions every day,” he explained.

The home’s window glass that has filtering ability and can display AI-powered computer images, furthermore, is closer than many of us might think. Leahy pointed to a video series by Corning called A Day Made of Glass, which makes the Nudge Home technology entirely plausible because much of it is in development now. The brightest future for technology in the home, the entire team agreed, lies in serving its inhabitants’ unique needs and desires—imperceptibly, and without any sense that someone’s watching—or lecturing. “Integrating technology into the environment that isn’t intrusive, that isn’t surveillance, and that isn’t sucking information out of you, but helping the user, is a compelling concept,” Leahy observed, but the home of the future shouldn’t abandon what already works. “Part of the charm of design is it can never be fully predictive. There’s always room for the happy accident, because as individuals we can be unpredictable. That’s why I think the future of machine learning is ultimately limited, because humans have individual imaginations and computers don’t—at least not yet, as far as we know.”

Read more about the "Big Ideas" percolating at Perkins Eastman