What Does School Safety Mean?

When a school shooting hits the news, debates about school design inevitably follow.

The familiar headlines followed close after nineteen children and two teachers died in a mass shooting at Robb Elementary School in Uvalde, TX, on May 24, many of them blaming school infrastructure for the gunman’s ability to attack. The well-trodden public imperatives came next: Harden the schools. Install metal detectors and “layers of security.” Hire armed guards. Train teachers to shoot.

But also around this time, Perkins Eastman K-12 Practice Area Leader Sean O’Donnell started fielding inquiries from clients and colleagues about his team’s research on schools and safety that resulted in a 2020 white paper. “The concern is that every time these tragic events occur, there’s incredible pressure to question and wonder what you might do differently to ensure the safety of children in our learning environments,” O’Donnell says. 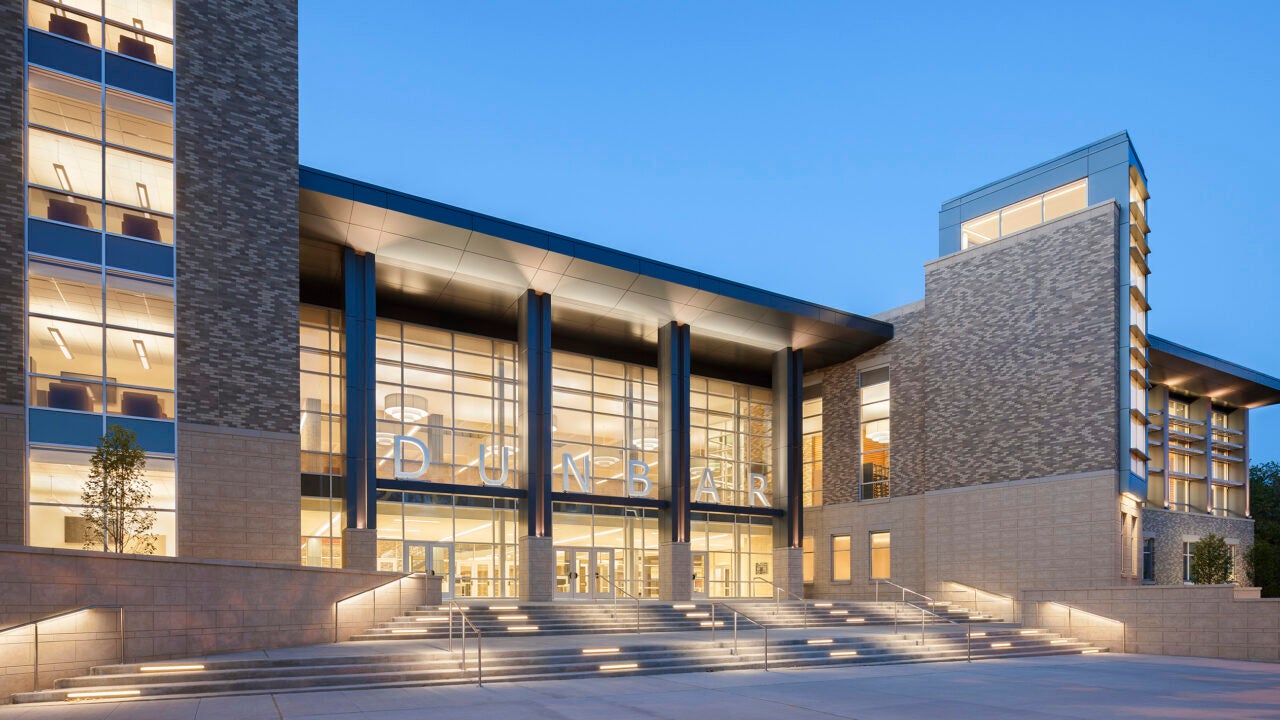 The answer is not as easy as the solutions proposed after Uvalde, according to The Texas Tribune, such as single-entry schools, “ballistic security lobbies,” and bulletproof doors. “It’s the flurry of political rhetoric that responds to fear. It’s kind of a knee-jerk reaction,” says Principal Robert Bell, who with Associate Principal Ann Neeriemer co-authored the white paper Design for Safe & Healthy Children. Schools that foster inclusion, stronger relationships between students and teachers, and stress-reducing environments are far better for students’ safety and wellbeing, the authors wrote.

School cafeterias can get loud and chaotic. Essex North Shore Agricultural & Technical School in Hathorne, MA, divides its cafeteria into different environments—some in the middle of the action, some quieter—so students can
eat lunch in a place where they feel comfortable. Copyright Peter Vanderwarker/Courtesy Perkins Eastman

More transparency and openness rather than hardening, along with subtle, almost invisible, safety interventions, is the true key to helping children thrive, learn, and grow. While threats such as school shootings should play a part in the conversation, they shouldn’t dominate it, Bell and Neeriemer say. The effects of bullying, persistent sadness and hopelessness, and suicidal feelings are far more threatening to K-12 students. The authors argue that effective prevention means fostering wellbeing among students so that no one reaches the point of desperation that leads to a violent act. Achieving that goal depends on a coordinated effort between designers, school districts, and their surrounding communities.

Neeriemer frequently presents on this topic, consistently arguing against the impulse to harden schools. During one of these presentations in 2021, she opened with two images side by side. One was a juvenile detention facility, and the other was a high school. Could anyone tell the difference? The tall, brutalist—and now demolished—Dunbar Senior High School in Washington, DC, was a sea of concrete pock-marked with tiny dark windows. 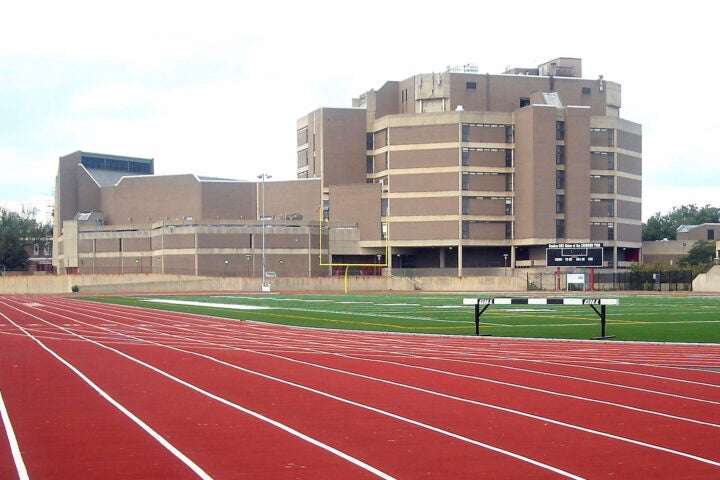 “When I hear about hardening schools, it brings to mind the prison-like school buildings that we have worked so hard to eliminate or transform,” Neeriemer said during this talk. Fortress-like structures with caged windows and concrete barriers may have protected the school, she explained, “but we have to consider what that did to the children who entered that environment. . . . This high school was actually referred to as a prison by the families in the neighborhood. There were significant issues and crime inside the school—in large part fostered by the hardened building that eliminated transparency and discouraged visibility and communication.” Such an atmosphere only amplifies the stressors children may already be bringing from home. “We risk sending a message as a society that we’re afraid of them, or they’re violent, or they’re not important enough to have clean floors or glass windows,” Neeriemer says.

The newly designed Dunbar, on the other hand, offers a profusion of light, along with welcoming, open spaces and visibility between rooms and even between different floors. (It was the highest-scoring LEED for Schools building ever designed at the time it was completed in 2013, “as a result of leveraging multiple opportunities to create a sustainable, resilient, healthy, and safer place to learn,” O’Donnell says.) 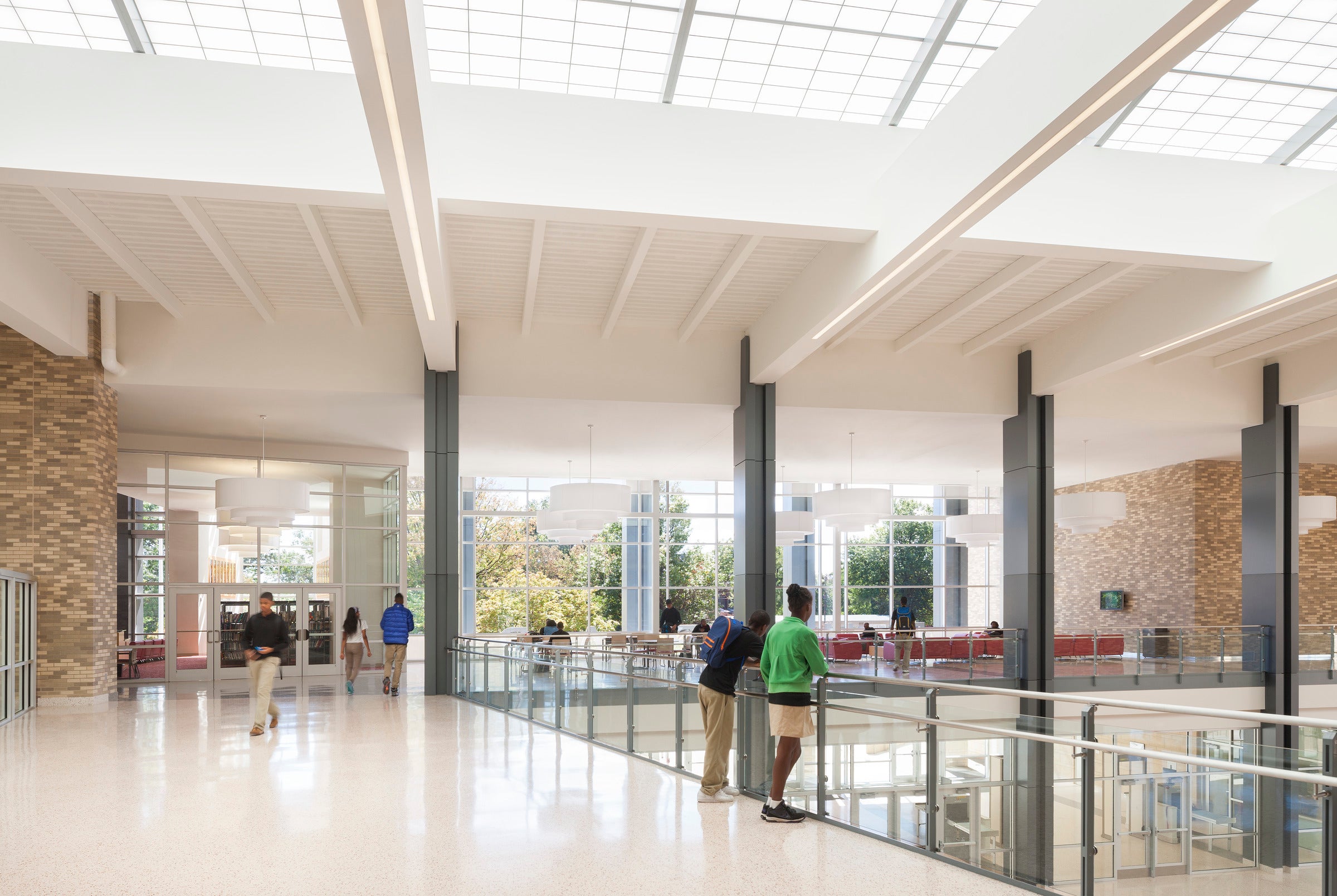 The bright Dunbar atrium provides sight lines from front to back, and between the main floor and second level. Copyright Joseph Romeo/Courtesy Perkins Eastman

Shortly after the Sandy Hook Elementary shooting in December, 2012, District of Columbia Public Schools brought in a third party to assess their facilities for gaps in safety measures. They concluded that Dunbar, which was under construction at the time, didn’t require any changes to its design. “They said, ‘We wouldn’t change a thing.’ This just confirms we’re doing the right thing, because it was important to create community,” Neeriemer says.

Creating strong communities that breed positive relationships and trust is critical for improving student health and safety. Most shooters have a connection to the schools they target. “Twelve of the fourteen school shooters in our database prior to the most recent attack in Texas were either current or former students of the school,” according to a May report in Scientific American. They are all young men, tend to be loners, and were often the targets of bullying. Prevention, then, might be more a matter of designing environments where students feel welcome, embraced, safe, and valued, rather than simply locking them behind bullet-proof barriers.

Neeriemer recently made this point to a middle-school client during a design discussion where the K-12 team was proposing porch-like niches along the hallways to define each classroom with a welcoming sense of entry. A concern was raised, however, about whether a potential shooter might be able to hide in one of those niches—away from hallway security cameras. “We had to talk about, ‘What do you believe will truly create a safer, more welcoming environment?’ ” Neeriemer says. In the end, the colorful embrace of these classroom porches won the day. 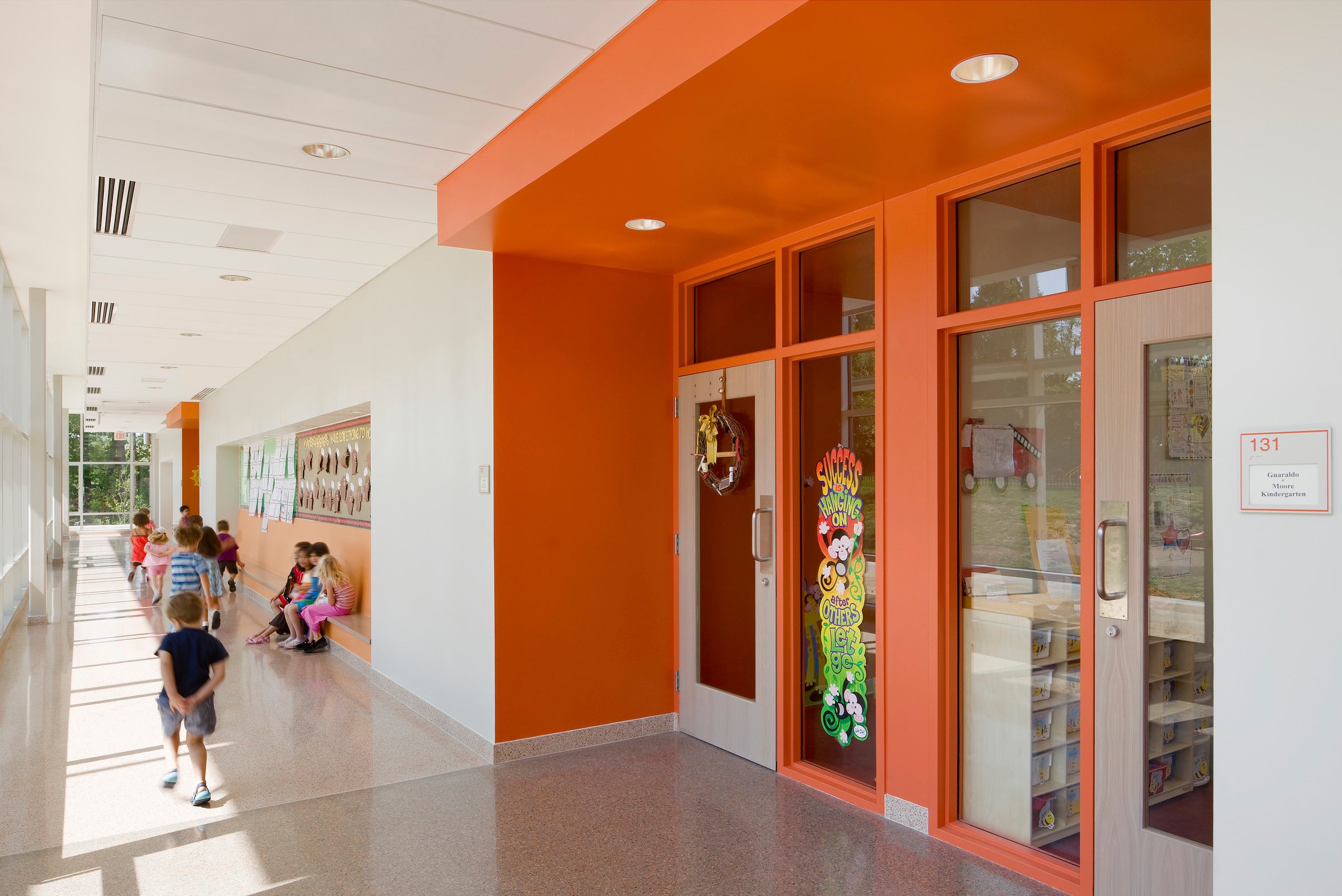 Other creative interventions have had a twofer effect, encouraging interaction among students and teachers while also creating a safer environment. The Dunbar layout, for example, spreads teacher and administrative offices throughout the school instead of closing them off in a single wing, thereby enabling students to have more frequent interaction with teachers and staff—but also allowing teachers easy, passive supervision throughout the day.

The assistant principal’s office is placed at the entrance to an academic wing at Dunbar High School
in Washington, DC. Copyright Joseph Romeo/Courtesy Perkins Eastman

Bell calls that approach “responsible visibility.” In their planning for Mount Greylock Regional School in Williamstown, MA, the team designed classroom “neighborhoods” around flexible open space, with each neighborhood containing a teacher planning office. He remembers the client reporting back later that a teacher heard, saw, and quickly intervened in a student confrontation before it had the chance to escalate. “There was an immediate, natural interaction from the teacher, and it was a positive one,” Bell says—the silver lining of this neighborhood design.

Bell is certified in Crime Prevention Through Environmental Design, a term that means building and landscape layouts themselves can go a long way toward preventing danger. Research cited in the white paper shows that transportation to and from schools accounted for the highest proportion of school fatalities in 2014—at forty percent. “If the focus is purely about saving lives, more attention must be given to transportation and site safety,” the paper said. Although transportation safety looks different depending on a school’s location, there are common themes that can inform a smart design approach, such as separating cars from buses and putting pedestrians first with wide pathways and landscaped buffers from vehicles.

At Zervas Elementary School in Newton, MA, Perkins Eastman designed a plan that places vehicular zones on the perimeter of the property, with wide, well-lit paths in a park-like setting at the front of the school that is both pleasing to the eye and provides excellent visibility for those who are coming and going.

This design-forward approach continues inside the school, where classroom doors have transoms and wide sidelights to let more light inside and also enable connections between the class and hallway. At the same time, those windows are located in such a way so there is an “out-of-sight zone” in each classroom where students can go so a potential shooter can’t see who’s inside. 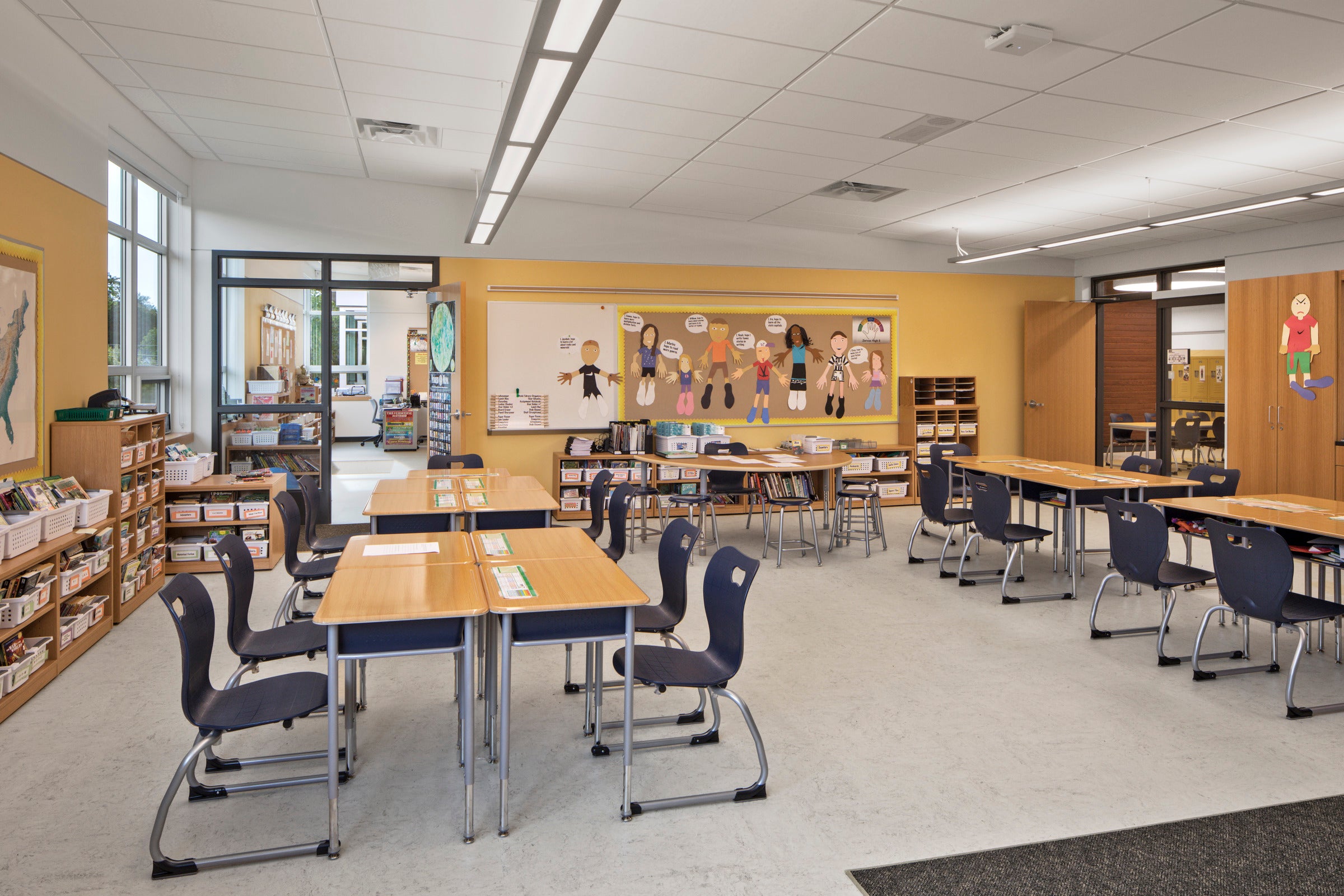 Built-in storage, above right, lines the wall adjacent to a classroom doorway and window at Zervas
Elementary School, preventing someone outside from having a clear view in that direction.
Photograph Sarah Mechling/Copyright Perkins Eastman

The research for Design for Safe & Healthy Children began after the 2018 shooting at Marjory Stoneman Douglas High School in Parkland, FL, which killed seventeen and injured seventeen more. There have been 119 school shootings since then, killing eighty-eight and injuring 229, according to EducationWeek. A worldwide pandemic shut down schools everywhere in 2020 and 2021, adding even more stress to our young population. Despite all these developments, Bell and Neeriemer’s findings—with help from Perkins Eastman Associate Principal and Design Research Director Emily Chmielewski—still seem freshly relevant. Beyond its design aspects, the paper includes detailed recommendations across five categories. They include hosting more community programs at schools to blend the generations; providing more counselors, psychologists, and supplemental mental-health services to help students who are struggling; and training school personnel in behavioral detection and de-escalation.

In the end, Neeriemer says, schools are all about those who use them rather than those who might attack them. “Kids can’t learn if they’re not well overall,” she says. “You have to think about both students and staff; you have to feel compassion for them, no matter their age. They’re fully formed people with their own fears and their own hopes and their own dreams. With every design choice I make, I ask if that decision is honoring their personhood.”