When a Project Gets Personal

Elma Milanovic, a Bosnian refugee-turned-architectural designer, designed new spaces for the non-profit that helped her get footing in a new country and culture. 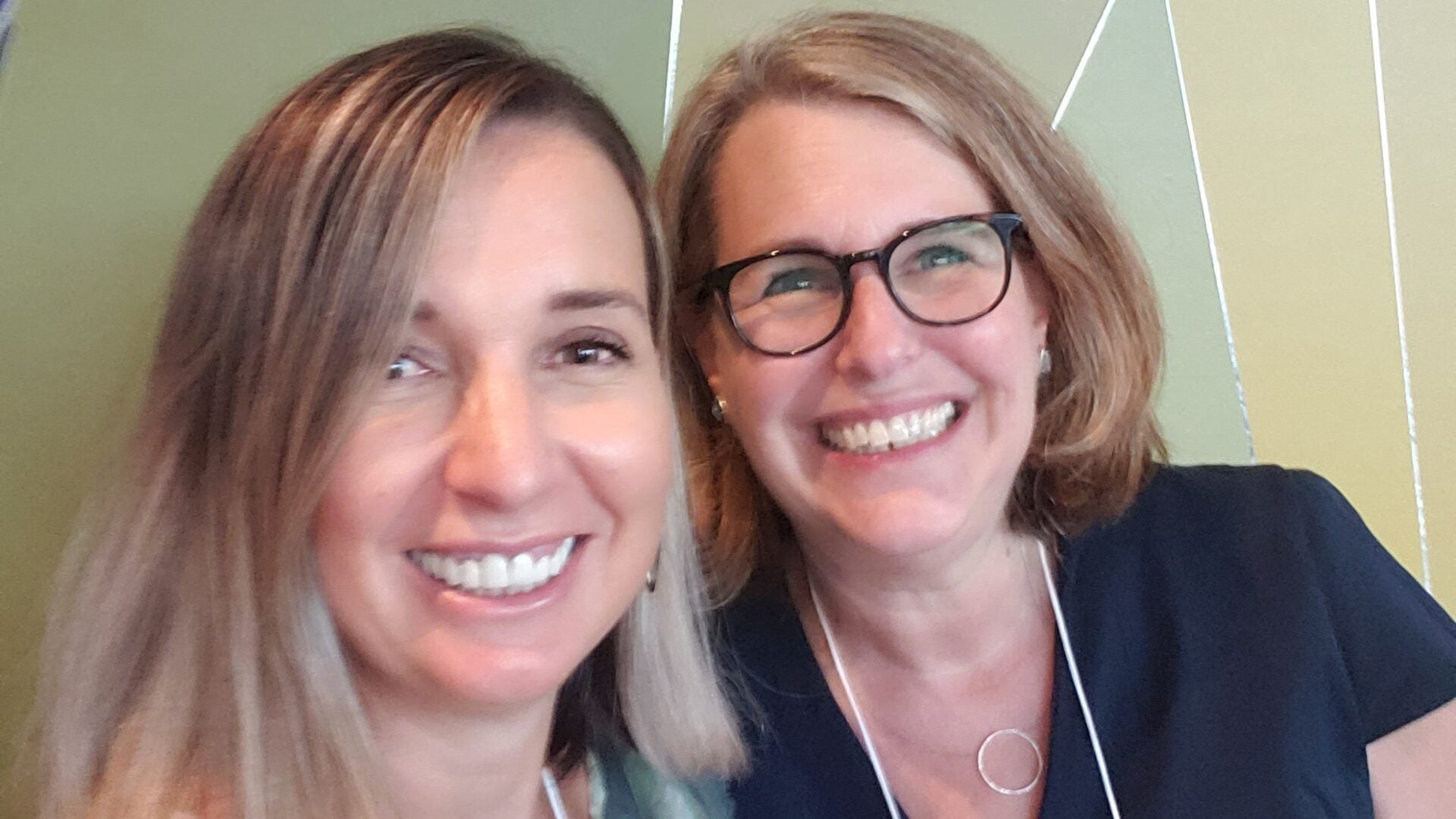 Growing up in the former Yugoslavia in the 1980s and ’90s, Elma Milanovic was always drawn to the arts. “I loved sketching, I loved dance and music. I always had a feel for design, interiors, fashion,” she says. But art was the last thing on her mind in August, 1995, when she and her mother Azra Hrncic arrived in the United States as Bosnian refugees.

“It was survival mode,” Milanovic recalls. The urgency to secure housing, enroll in school, find a job, and navigate Chicago were immense and time-sensitive pressures. “We got here at the end of August. I got my job the third day here and started high school the next week.”

Navigating a new country, city, and culture can be overwhelming, but thankfully, says Milanovic, Chicago and the surrounding region are supported by many organizations that assist refugees with these exact challenges. Milanovic credits this network with helping her mother and her with all the many necessities—transportation, food, used furniture, clothing, and so forth. “We were really fortunate to have strong community support that provided us the ability to establish ourselves, to assimilate a little bit easier.”

Much of that support came from JCFS Chicago (formerly Jewish Child and Family Services). Established over 160 years ago, JCFS carries out its mission through its myriad programs and services “to provide help, healing, and caring services infused with Jewish values to strengthen lives in our community.” One such program, HIAS (initially known as the Hebrew Immigrant Aid Society) was a major source of assistance. 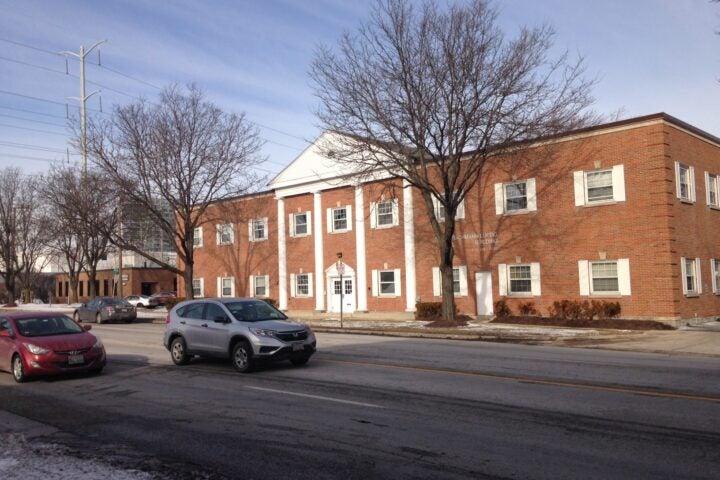 The original JCFS Chicago building, with its faux colonial façade, was in need of a refresh.

Within a few years of arriving in Chicago, Hrncic became a caseworker for HIAS, assisting many other refugees from the region of former Yugoslavia arriving in Chicago between 1995 and 2000 while Milanovic, guided by her mentors at HIAS, JCFS, and her high school, found her way to the University of Illinois Chicago’s architecture program. In 2002, a mere seven years after first arriving in the United States, Milanovic was awarded a bachelor of architectural studies degree and started her career in architecture and design in Chicago.

JCFS Chicago remained a peripheral part of her life as she embarked on her design career, but it wasn’t until 2018 that the organization once again came into focus. Milanovic, by now an established architectural designer with the global architecture, planning, and design firm Perkins Eastman, happened upon a Request For Proposal (RFP) on a colleague’s desk while stopping by for a chat. It was from FacCorp (the company that owns and manages JCFS Chicago and other organizations’ properties) and JCFS Chicago.

“I said, ‘Wait, is this the JCFS out in Skokie?’ And my co-worker said, ‘Yes, what do you know about them?’” Milanovic shared her backstory, noting her admiration for all JCFS had done for her and her mother. “It would be an honor to help this organization design its facilities because they do such wonderful work for the community,” she recalls saying in the conversation. Then she began to strategize.

“I went straight home to my mother and asked her if she still knew people at JCFS that I could reach out to,” Milanovic says. Armed with its broad expertise, deep portfolio of work, and guided by Milanovic’s knowledge and devotion to JCFS’ mission, Perkins Eastman made it to the interview stage in the selection process. “I used my story because I felt it added that extra personal touch – and we ended up winning the project,” Milanovic says.

The project—planning and design for the renovation of JCFS’ existing building in Skokie and identifying and designing additional program space—became Milanovic’s to manage. Nearly twenty-five years later, JCFS and its programs had once again become central to her life.

JCFS Chicago’s offices at the Goldie Bachmann Luftig Building have been at 5150 Golf Road in Skokie, IL, for more than fifteen years. The two-story building was in good shape and in an excellent location. Still, recent and accelerating growth of JCFS Chicago’s programming and outreach had made change necessary. In planning for the renovation and expansion, JCFS identified three key challenges that needed to be addressed:

1.       A dated building that was no longer functional because the organization had changed so much

Making the spaces aesthetically appealing, functional, and adaptable to change were imperatives, but JCFS’ leadership and board were also cognizant of the need to be responsible stewards of the money that would make the project possible—not a cent could go to waste. FacCorp and JCFS’ staff and board were further buoyed by their decision to select Perkins Eastman. “We felt that Perkins Eastman and Elma best understood how we wanted to invest the money—it wasn’t ‘the sky is the limit.’” says Stacey Shor, President and Chief Executive Officer of JCFS Chicago.

Once awarded the project, Milanovic and the Perkins Eastman team quickly got to work. “We created a wish list and balanced that against what they thought they could fundraise,” says Milanovic. 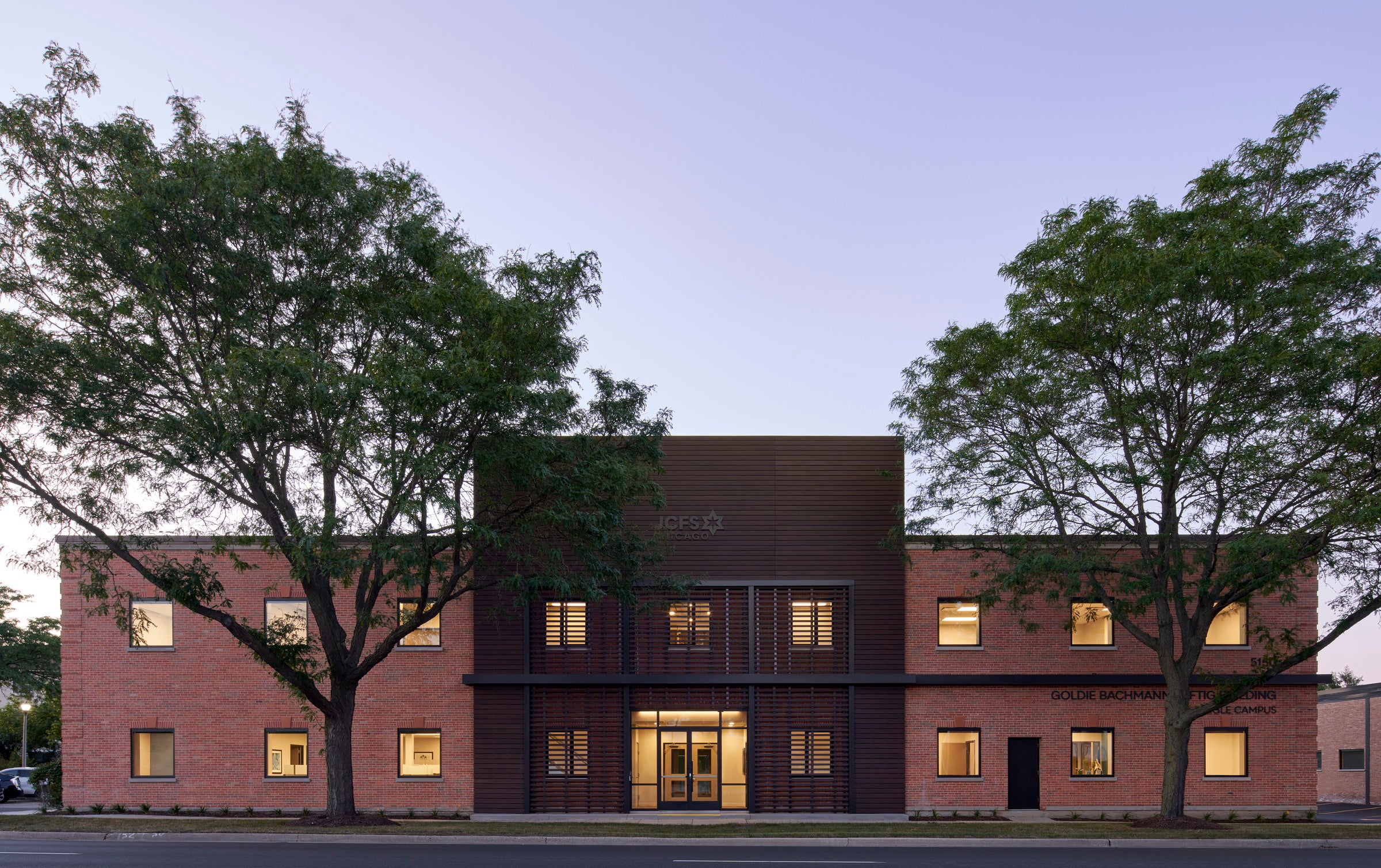 Help From Next Door

The need for additional space and parking was solved when the building next door, then a carpet store, became available for purchase. But marrying the one-story building with its shingled mansard roof to the faux colonial façade of JCFS’ existing building upped the design challenge, especially given the modest budget that accompanied the project. 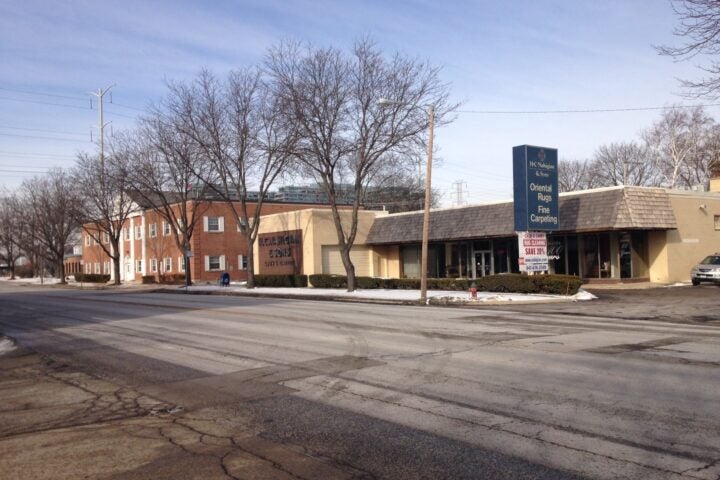 The newly acquired carpet store had the space JCFS needed, but creating a cohesive look for the two buildings posed a challenge to Milanovic and the Perkins Eastman design team.

Bringing together the disparate elements of the two buildings’ exteriors took some creative problem-solving and meticulous editing. First, both buildings were stripped of extraneous details. The faux columns in front of the main building were removed along with the deteriorating shingles and roofing of the adjacent carpet store. Working with a clean(er) slate, the team designed a wood screen at the exterior between both buildings and added a strong, dark metal linear element that continued from one building to another to create an implied connection. “There is no direct connection due to budget constrictions—but if you step back, there is this linear, aesthetic connection that creates this campus feel that they wanted to have,” says Milanovic.

Laurie Price, a JCFS Board Member whose experience as a building contractor informed the project approach, was inspired by Milanovic’s passion and creative talent. “As much as we lived it, Elma made sure every detail was addressed. She helped deliver high design without the high price.” Once the planning and design was complete, the project broke ground in March of 2020—just as the COVID-19 pandemic started to spread throughout the United States. The State of Illinois, unlike many others, declared construction an essential service during quarantine, so FacCorp and JCFS Chicago forged ahead. “Certainly, there were some parts of it that made it more challenging, but for the most part, it was a blessing in disguise,” Shor recalls. The JCFS Chicago staff vacated the building and continued their roles remotely due to quarantine, while the carpet store closed its doors for good, which freed up both buildings for a full-scale renovation, another time- and money-saving component. 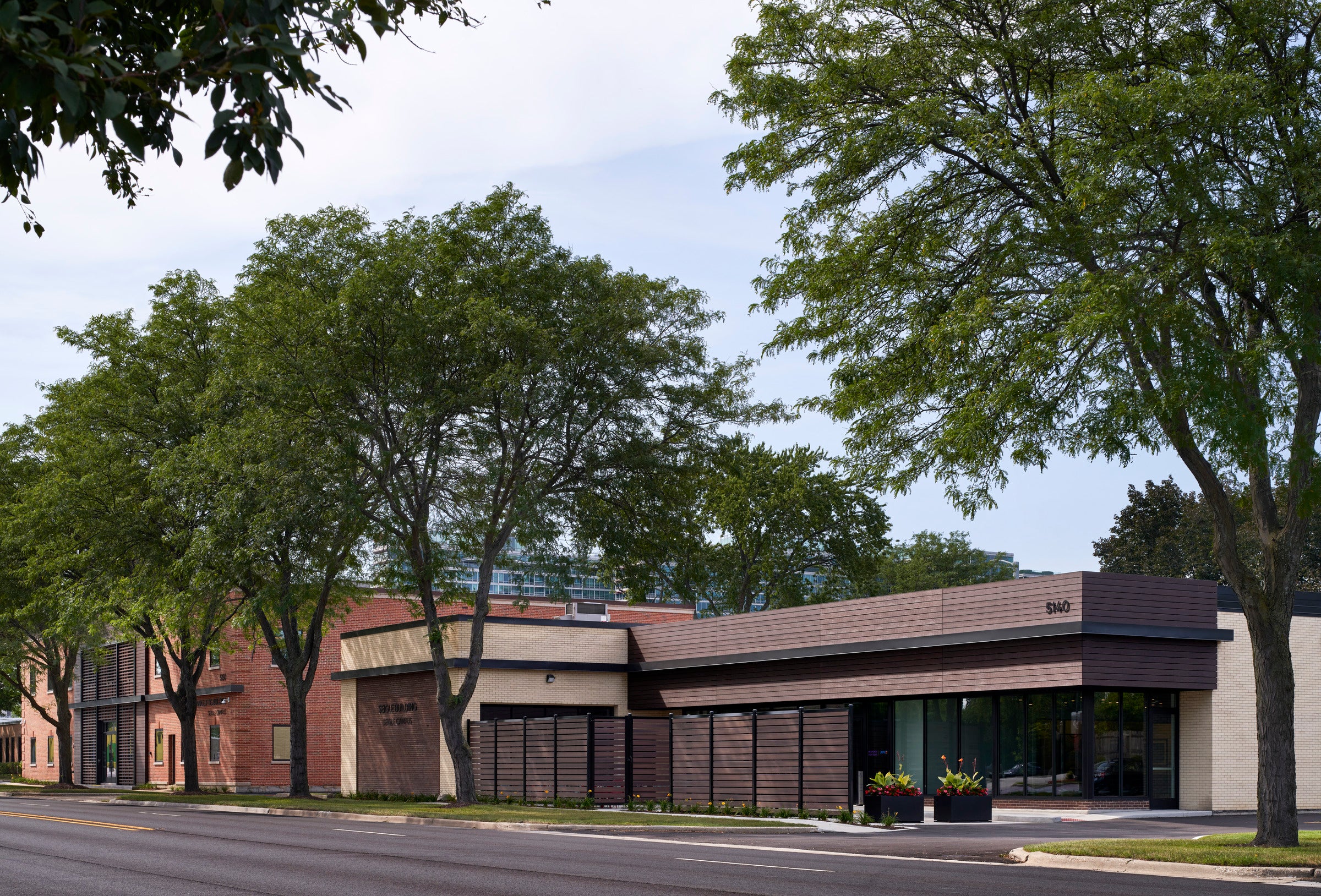 When taken in together, both buildings clearly are speaking the same language. Photograph by Andrew Bruah, courtesy Perkins Eastman.

The client selected Landmark Construction Services, Inc., which had successfully worked on a prior capital project for the organization. To ensure the best service possible, Jay Bradarich, president of the company, came on as project manager. Working side by side, Milanovic and Bradarich made a great team. “It was very fluid,” says Bradarich. “Not like the traditional model of client in the center, and architect and contractor on opposite sides—more like a triangle—in tandem. This allowed us to keep up with all the questions we had and avoid change orders – saving money and keeping the project on budget and on time,” he adds. 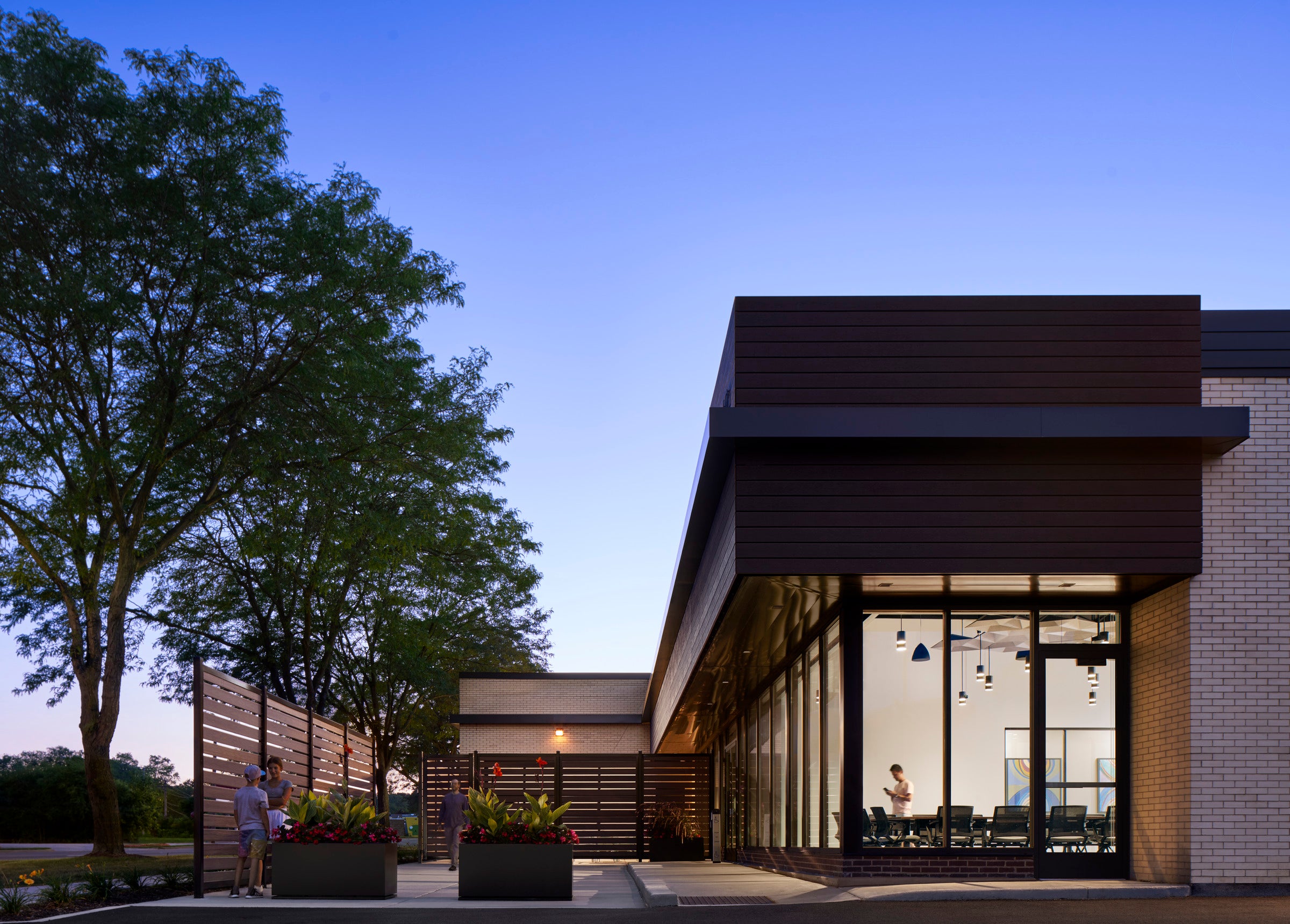 The JFCS Chicago Seigle Campus in Skokie opened in late July of 2021. The grand opening, held in the new outdoor patio between the two buildings, was attended by JCFS Chicago staff and board members, donors, and members of the design and construction team, including Milanovic and Bradarich. 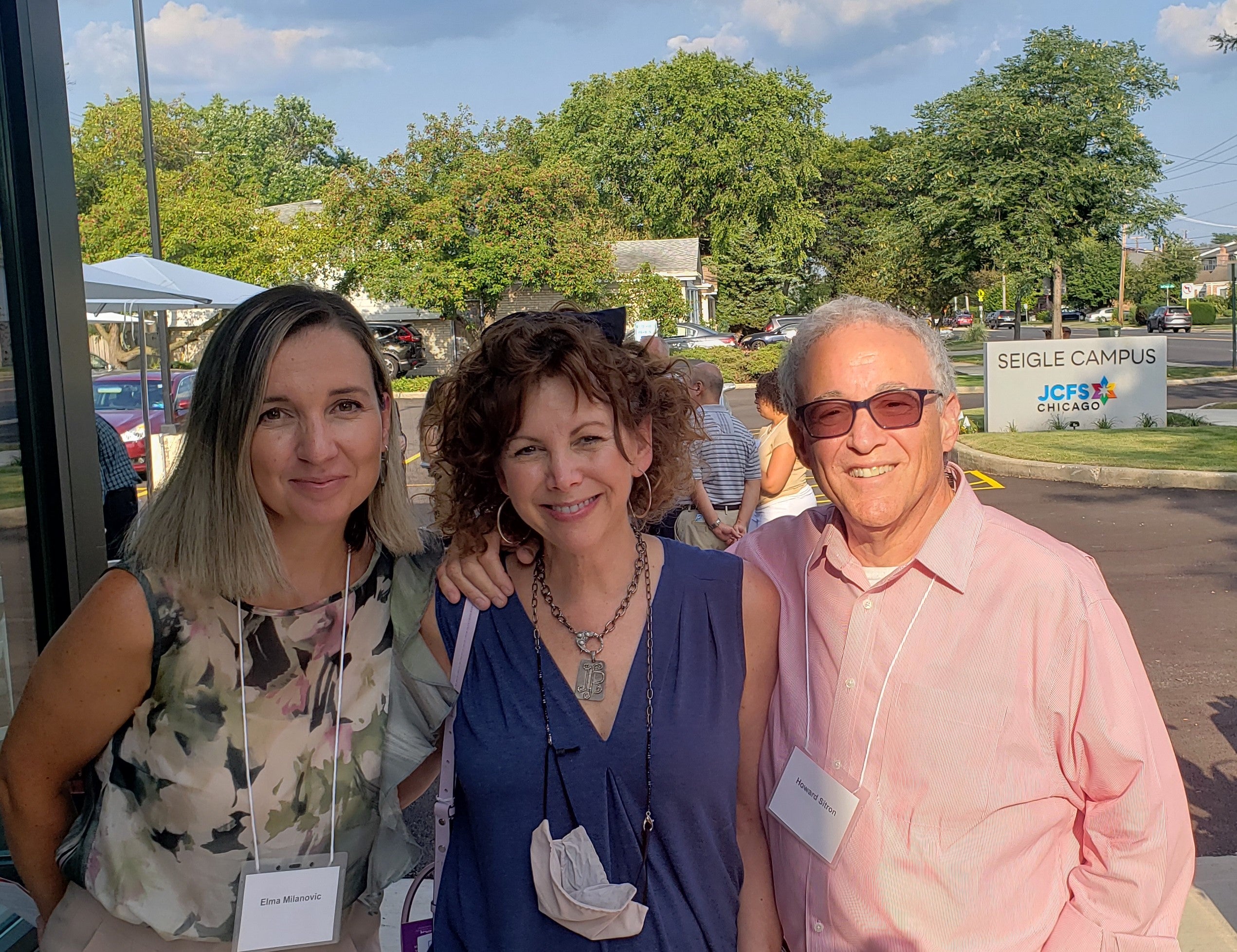 Milanovic, who knows firsthand the experience of arriving as a stranger to a new country and culture, expands on this thinking. “I’m a Bosnian Muslim and JCFS is a Jewish organization. Stories like this are extremely important in today’s times, and what this organization promotes is truly special, not only from the viewpoint of refugees but from the viewpoint of creating a strong community free of discrimination and hate.”

JCFS Chicago and HIAS are currently welcoming more than fifty Afghanistan refugees to the Chicago area, continuing the cycle to which Milanovic and her mother are inextricably linked.

“The fact that Elma herself was the beneficiary of services that would be in the building really fit so well with the mission of the organization,” Shor says. “Elma was somebody who, in a completely different way, understood the impact of the work that is going to happen there.”