Much of Metro Vancouver’s future—where residents live, work, and play—takes place in areas served by SkyTrain. More than 35 years after VIA served as lead architect for the original line, TransLink has been upgrading its stations to accommodate ridership growth, meet accessibility standards, and improve customer experience. VIA acted as prime consultant for five award-winning station upgrades on the Expo Line, including Main Street Science World (2015), Commercial-Broadway (2014), Metrotown (2018), New Westminster (2019) and Burrard Station (2021). 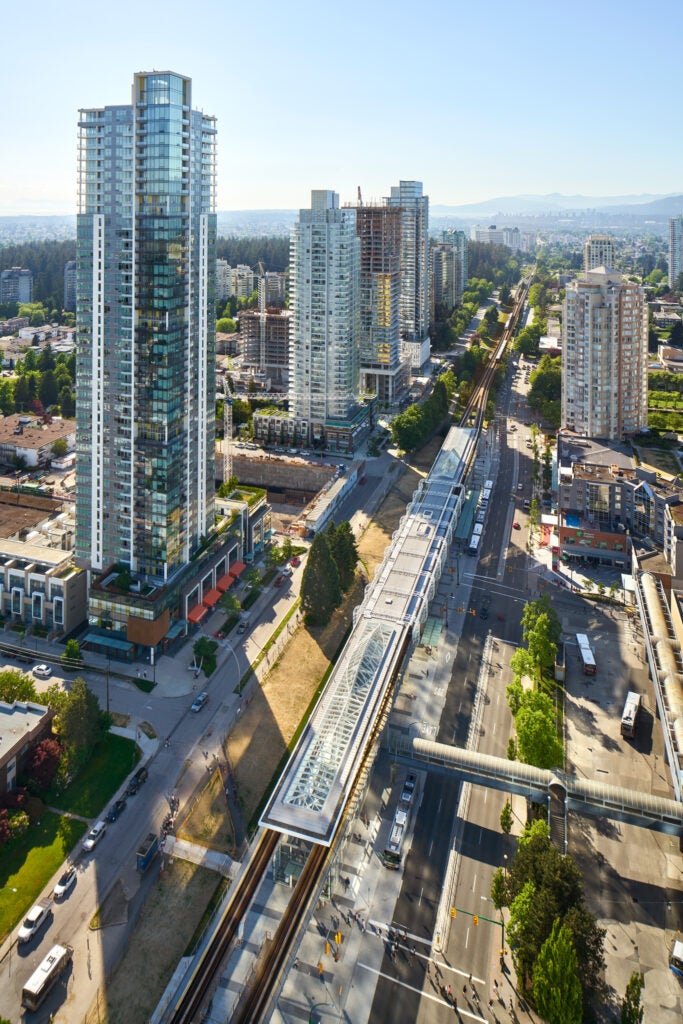 Metrotown Station is the biggest station renovation in TransLink’s history. We executed a complete overhaul of one of the busiest Skytrain stations in Vancouver. At 10,400 sf, the new Metrotown Station is twice the size of the original. The station was re-envisioned as a ground-plane focused transit hub designed for high volume, complex pedestrian movements, intermodal transfers, and an active and animated street life. Its memorable new canopy support frames and the entire loop-truss and roof assemblies were designed to allow overnight crane lifting in non-revenue hours.

Main Street Station had long been an anomaly within the system of design thinking employed for the Expo Line. Opened in 1986 adjacent to a decommissioned concrete plant at the Expo Centre entrance to the Expo 86 World’s Fair, its urban context had substantially changed by the time of planning for the 2010 Olympics. With an office tower inserted above and residential development abutting, its functional design had to be addressed to accommodate the pedestrian, bus, vehicular and goods movements around one of the city’s busiest intersections. 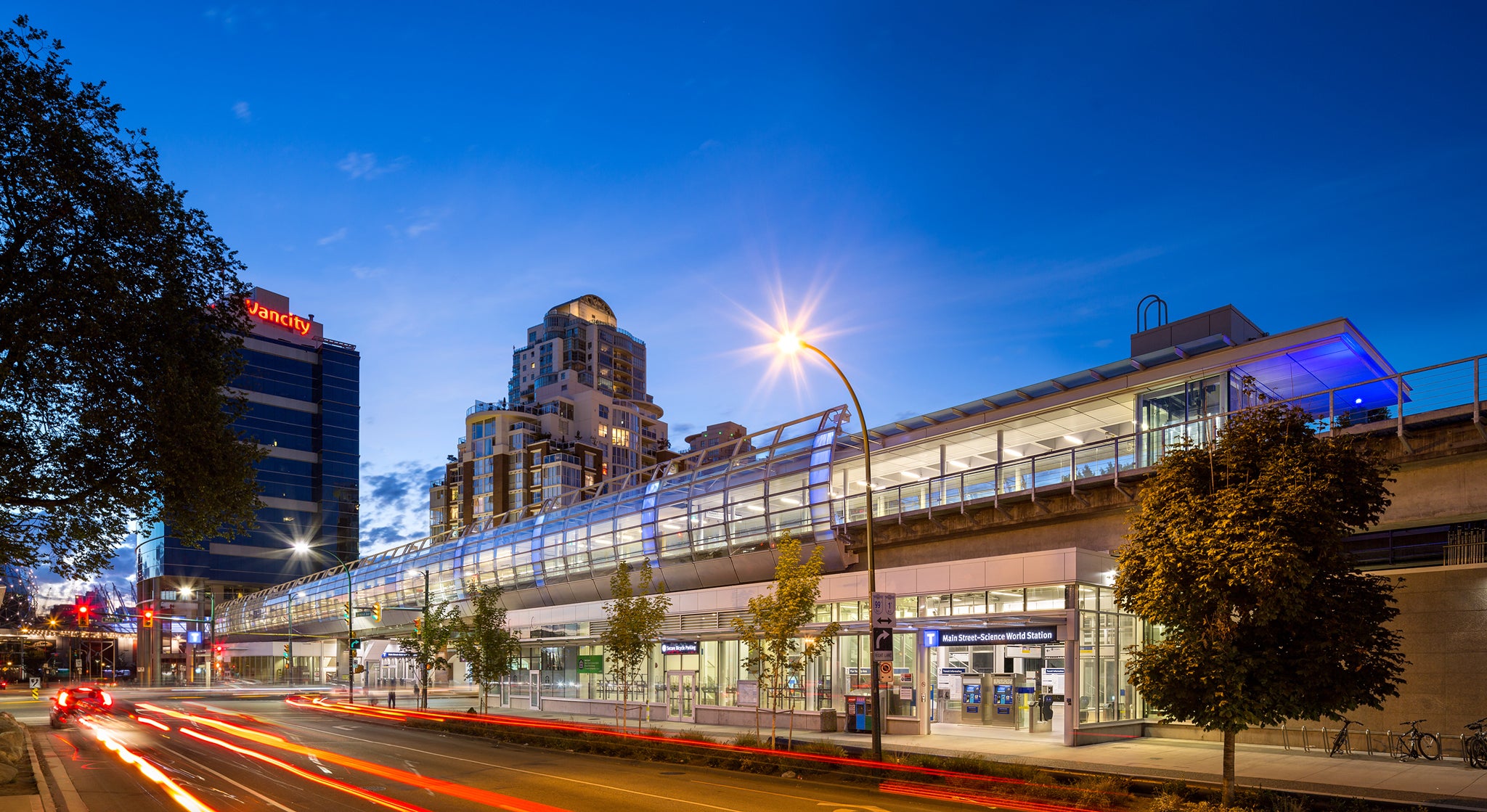 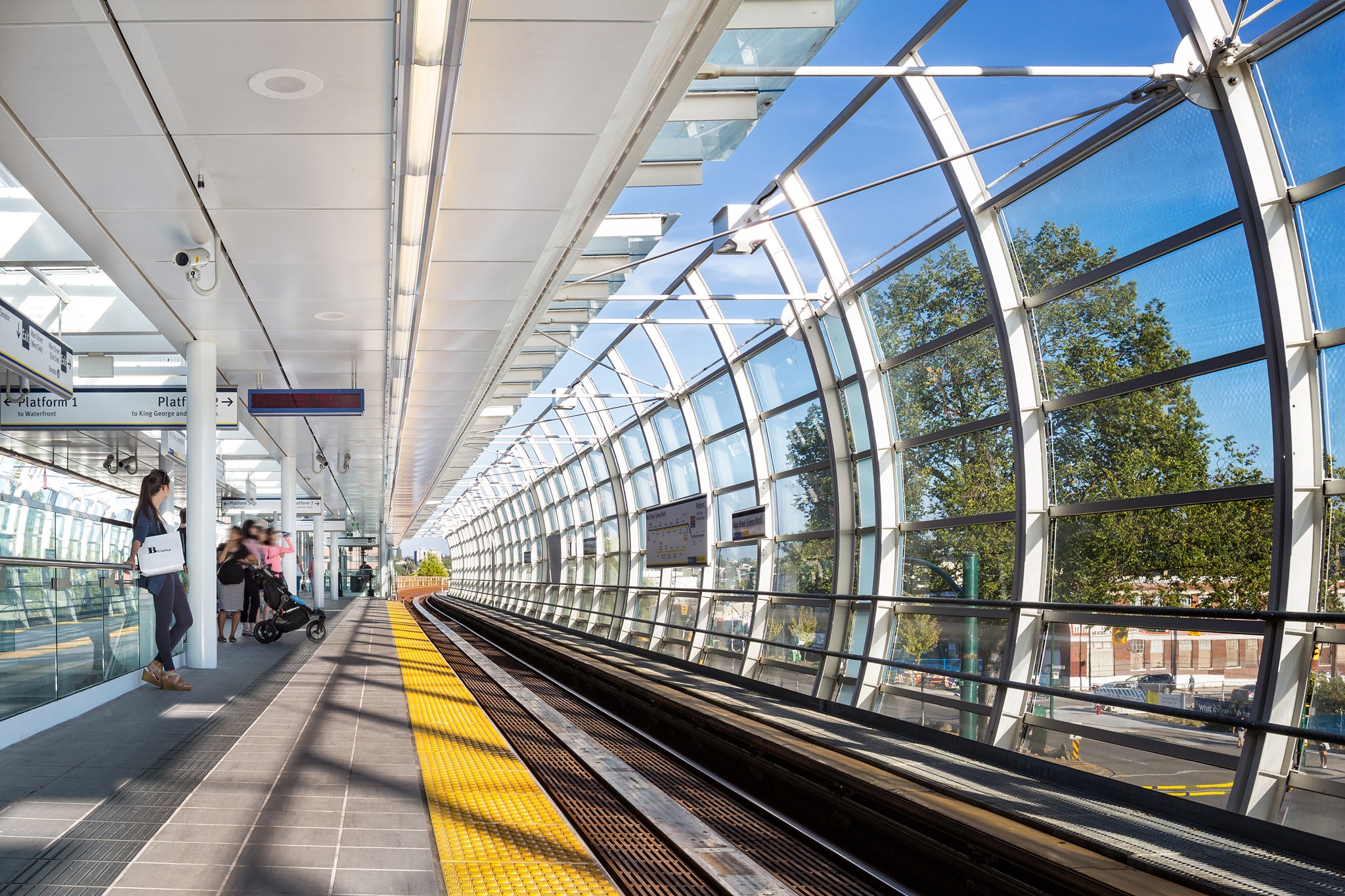 A new secure bike station is now available at street-level, along with much- improved retail and ticketing stations. We worked with TransLink to develop a station design that could be phased and sequenced to remain in operation, moving 20,000 daily passengers. This protocol included single-tracking the trains through the station and using prefabricated structural elements  to reduce impacts on transit operations and traffic on the surrounding roads below.

The New Westminster Station SkyTrain platform is the centre concourse of a shopping mall, providing instant rider connection to shopping, a 10-screen movie theatre, full-service grocery store, bus loop, parking (425 stalls), and three high-rise condos. The project also features an integrated heritage building. This station demonstrates the best example of transit-integrated (as opposed to oriented) development in the region. It was a multi-phase and multi-year effort for multiple clients, including Degelder, First Capstan Realty, and TransLink.

The final project provides 640 dwellings with direct station access. VIA also provided lead architecture for AQUA, an adjacent fourth tower just steps away with an additional 398 units. VIA completed the TransLink Station Modernization program for New Westminster in 2018 in a separate contract.

Commercial-Broadway is a major transit station complex in Vancouver’s SkyTrain system, serving a portion of the Expo Line as well as the Millennium Line. Formerly two different stations, Commercial-Broadway underwent multiple major renovations to station platforms and vertical circulation functions all to better serve its new expanded role as a HUB station that offers transfers between both Lines. VIA was responsible for the overall project direction and consultant coordination on the Commercial Station’s upgrades and provided design services up through detail design for Broadway Station’s new south entrance.

Nearly 30 years after the original opening of the Burrard SkyTrain Station, VIA is working with TransLink to upgrade this important underground transit exchange and prominent civic square located at the heart of Vancouver’s business district. VIA’s proposed design increases station capacity without the need for expanding outside of the current site boundaries. This complex and intricate project involves significant collaboration with the City, TransLink, and other various stakeholders. 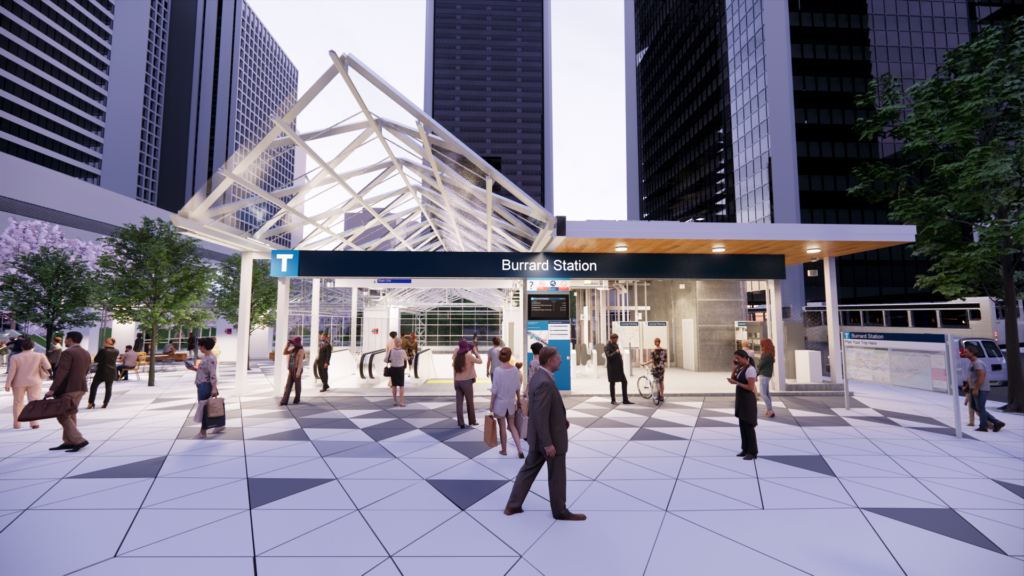