Building re-use and upgrades should be the default over teardown and new construction for a more sustainable future.

Pfeiffer Principal Stephanie Kingsnorth was driving home from her Los Angeles office recently when she stopped to pick up dim sum for dinner. The eatery, she noted, occupies what was once a Bob’s Big Boy restaurant – the chain’s memorable Big Boy statue still greets passersby from the parking lot. A little further down the road, a former Office Max sits vacant. “I just looked at it and said, ‘What’s going to go in there? What’s it going to become?’” she wondered.

The built environment is rife with these kinds of possibilities as the architecture, engineering, and construction industry grapples with old buildings whose purposes have come and gone. Earlier this year, Perkins Eastman—where Pfeiffer is a newly distinct studio—was among more than 150 AEC firms nationwide that signed a letter to the Biden Administration, urging its climate leaders to include building-sector policies among President Biden’s actions to combat climate change. “Building Reuse and Upgrades” was one of several priorities outlined in the letter. “Existing building upgrades offer immediate opportunities to achieve rapid progress towards an environmentally responsible and socially equitable future,” it said, noting that the combined square footage of existing commercial and residential buildings exceeds annual new construction by a factor of eighty-five to one.

Kingsnorth and her firm have guided the rehabilitation and transformation of beloved and celebrated buildings such as the historic Griffith Observatory in L.A. (above, left) and the midcentury Charles L. Tutt Library at Colorado College in Colorado Springs, CO (above, right). She can’t help thinking, however, about the forgettable “background buildings” that have come to fill our landscape, such as that Office Max and other vacated structures that once housed big-box retailers. “It takes someone with a unique mindset to look at a building and say, ‘We can do something amazing with that,’” she says.

Though Pfeiffer hasn’t had yet the chance to work on that kind of a building, it does have an established record of “re-architecture,” Kingsnorth says. It’s the process of dramatically renewing aging buildings such as Tyler Hall at the State University of New York at Oswego (below, left), which had become an “embarrassment,” according to Dr. Julie Pretzat, Dean of Oswego’s School of Communication, Media and the Arts.

Prior to its renovation, Tyler Hall was surrounded by a moat-like concrete wall (above, right) – not exactly the right message for a building that houses the university’s performative theater, music and visual arts departments. A new master plan removed the barriers and added a light-filled bridge between Tyler and an adjacent student-services building. Along with major enhancements to the interior spaces and the showcase, 525-seat Waterman Theatre (below), the 1968 building has become an anchor to what is now an arts precinct on campus. “Our building has now become a ‘must see’ on campus tours and has helped increase student interest in our arts programs,” Pretzat says in a statement on Pfeiffer’s website. The project shows how a once-forgettable building—which could have been a target for removal—can be rehabilitated into something that’s celebrated, Kingsnorth says. “It’s about what can we sustain rather than tear down?” she says. If a building is merely “ugly,” she adds, “That’s an easy fix. We’re architects. We can do better than that.”

Building re-use can take almost any form, whether it entails major upgrades to better serve its existing purpose or whether it’s an adaptive reuse, where one building type is transformed into something entirely different using the existing structure. Either way, the theory remains the same, according to former American Institute of Architects President Carl Elefante, “The greenest building is the one that already exists.” Indeed, a 2016 report for the U.S. National Trust for Historic Preservation contends that “reusing an existing building and upgrading it to be as efficient as possible is almost always the best choice regardless of building type and climate,” according to an article on the topic in the British publication Architects’ Journal. Re-use means less waste in the landfills; less “embodied energy” that comes from extracting, manufacturing, and transporting new building materials to a construction site; and more emphasis on knitting new development seamlessly into an established community.

Perkins Eastman is already leading the way in these arenas, in many ways because it ties back deeply to our Human by Design ethos. “There’s a human aspect to building preservation,” says Heather Jauregui, Director of Sustainability for Perkins Eastman. “Sometimes the projects that are the most rewarding are those that people didn’t want to save to begin with. If we knock them down, we risk losing a part of our diverse urban character,” she says. “With urban revitalization, re-use aids in our collective memory, our sense of belonging.”

From One Maker Space to Another 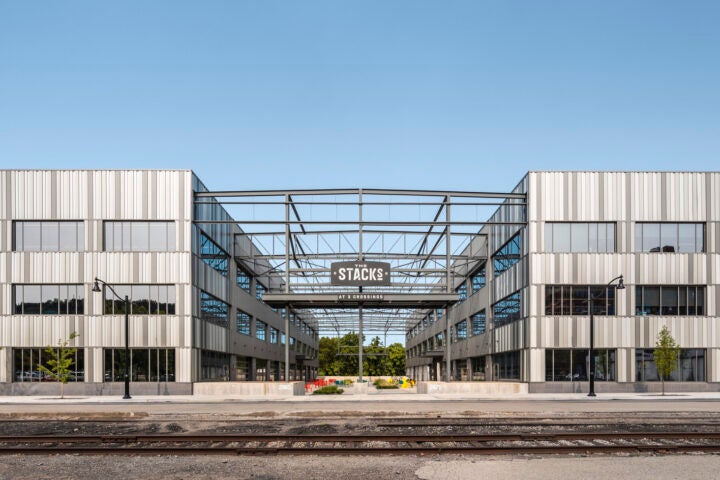 In some cases where developer clients initially want to raze a site and build new, Perkins Eastman teams propose designs that will preserve the existing infrastructure, as it did with the 2.0 Phase, known as The Stacks, of the 3 Crossings development in Pittsburgh, Principal Jeff Young says. “We integrated the site into the urban fabric of the Strip District,” a formerly industrial waterfront neighborhood that’s evolved into the city’s new tech sector. In this case, the design converted three bays of an old cardboard factory into office buildings, neatly inserted into the factory superstructure with its original steel trusses and accents of wood reclaimed from the factory’s original ceilings. 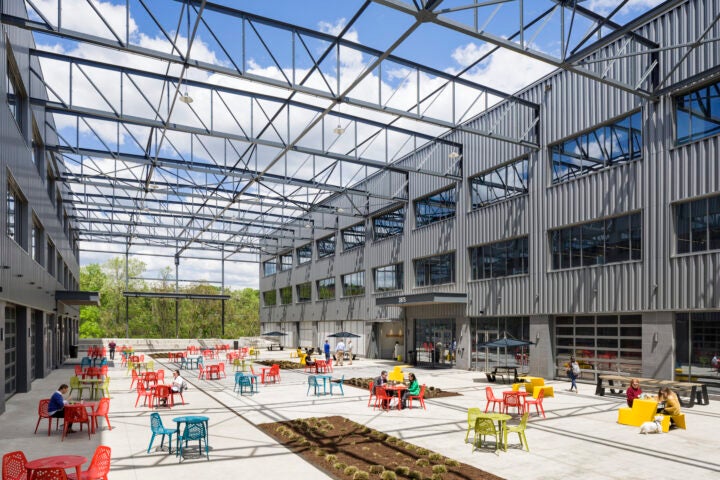 The original trusses form a natural pergola over the courtyard between the converted factory bays at The Stacks at 3 Crossings. Photograph copyright Andrew Rugge/ Courtesy Perkins Eastman

A stainless-steel, cone-shaped structure that served as the factory’s dust-collection system will also remain intact – at Perkins Eastman’s suggestion – to serve as an icon marking the presence of this new development, which will ultimately include a residential building and public open space. Photography of the original site, furthermore, is framed in the office buildings’ lobbies. 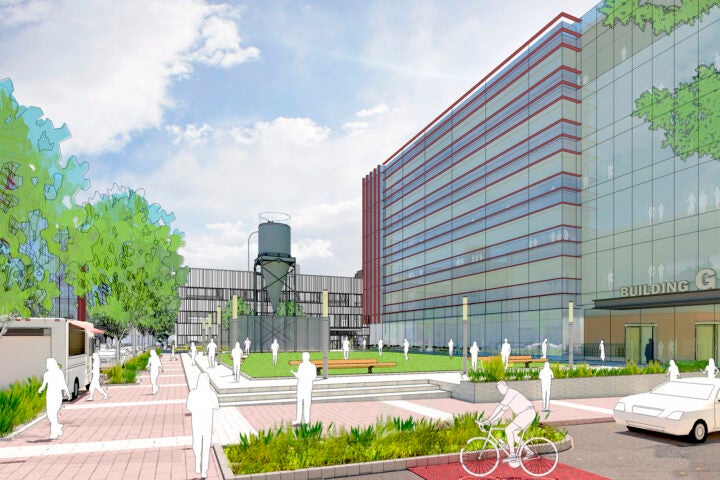 A rendering shows the perspective of future buildings at 3 Crossings, looking back at The Stacks and the reclaimed icon structure. Courtesy Perkins Eastman.

“It’s the ultimate recycling project,” Young says. “We proactively generated some different ideas about salvaging this building for the good – it makes for a richer outcome,” he adds. “This doesn’t have to be a struggle. Folks like the grit, that patina, that authentic story” of honoring a building’s roots. One of the first tenants in The Stacks is the British firm Smith + Nephew, which purchased a local startup that manufactures surgical instruments. The space includes labs for research and development and prototype building. “It totally fits with this maker history of Pittsburgh,” Young says. 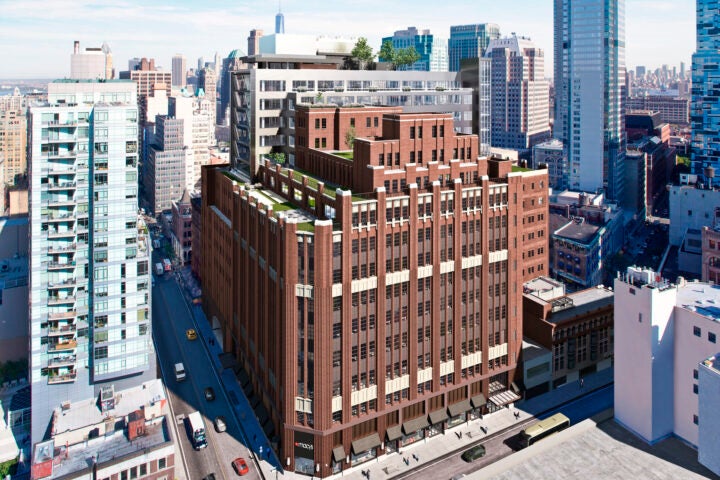 Working with Tishman Speyer Properties, Perkins Eastman was tasked to create a cohesive office-building complex from three existing buildings that take up most of a city block in Brooklyn – each of them built in different decades spanning the 19th and 20th centuries as the Abraham & Strauss department store kept expanding its presence. The mission was clear from the outset that the facades of these buildings – the cast-iron front of the original 1880s building on Fulton Street, the taller, Deco-era brick addition next door, and an equally tall 1947 arrival along the parallel Livingston Street on the other side – would remain. Those profiles “have been part of the neighborhood fabric for a very long time,” says Senior Associate Grace Tang, who was heavily involved with the adaptive-reuse project. The new design preserved the floor placement of the newer buildings but gutted everything behind the 19th-century façade, which didn’t align. A tall glass addition rises up in its place with the help of selective new foundations, providing better access to daylight for its new tenants. And what started out as a challenge – the foundations of the 20th-century buildings couldn’t support significant additions on top – became an opportunity to add abundant outdoor space across several roof lines. “What made this unique is most of the office floors have direct access to roofs,” Tang says. 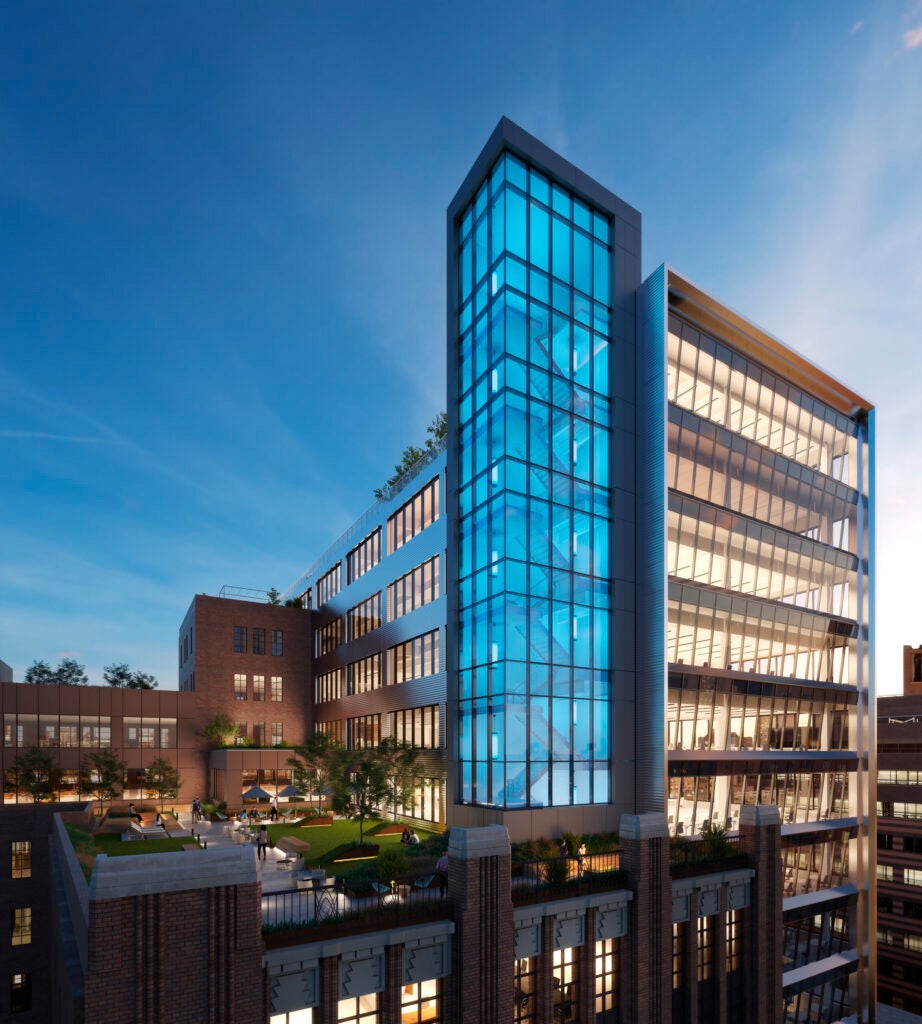 Multiple rooftop spaces are visible in this rendering of the Wheeler building. Courtesy Tishman Speyer

All of that stepping also presented tenants with opportunities to make additional massing changes atop existing roofs to create unique taller spaces where needed. The result is a mixture of historic and new facades of metal, brick and glass – “It does have its own quirky character,” Tang says. “And the new glass overbuild façade spanning the city block gives the project a unifying identity.”  Even better? The Macy’s department store, which has retained the first four floors of the building, has continued to operate all throughout construction, carrying on the retail tradition on that stretch of Fulton Street more than a century after it first arrived.

A Once and Future School 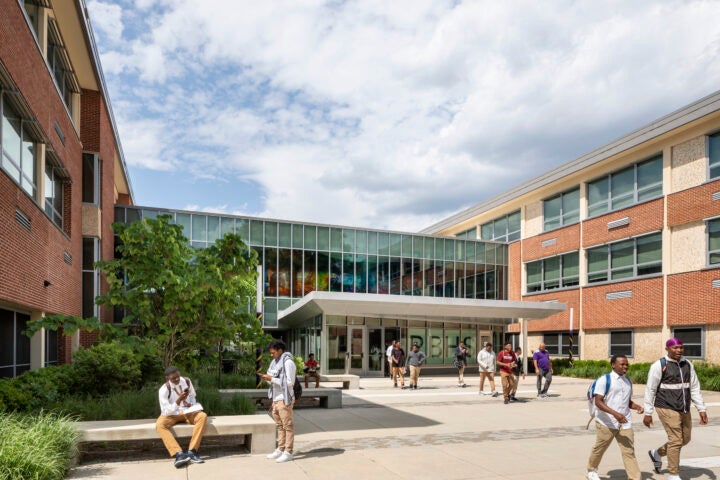 The team at Perkins Eastman DC had already completed a community center and library situated around parkland in the city’s Deanwood neighborhood in 2011, but when the former Ron Brown Middle School was closed for lack of enrollment in 2013, the dated, vacant school building became a weak link along the recently upgraded park and recreation area. Recognizing its key location, however, the city government asked the firm to transform the building into a magnet high school. “They wanted to address unmet needs of the student population in new and creative ways,” says Perkins Eastman K-12 Practice-Area Leader and Principal Sean O’Donnell. “One of these ways was to create a high school for young men of color.” Our team, along with Gilbane Construction, were given a super-accelerated schedule: They wanted the first students to enter Ron Brown College Preparatory High School within seven months of the project start.

Given that timeline, the design team wanted to achieve maximum effect with minimum intervention, so even though the old building was aesthetically nothing to write home about, re-using it was a foregone conclusion. The solution was to focus on a few “big moves,” as O’Donnell describes them, to make the architecture meet the school’s values and aspirations, which are to encourage students to achieve their highest academic, social and emotional potential. Starting at the entry, a narrow connector between the school’s main, three-story sections, the new design replaced its brick cladding with glass. “It felt like a fortress – it was intimidating, uninviting,” O’Donnell says. The new breezeway offers a view from the front of the building through to its courtyard and the park beyond, and its glass panels feature images of significant figures in African American and Latin American culture to provide inspiration from the moment students walk through the door. 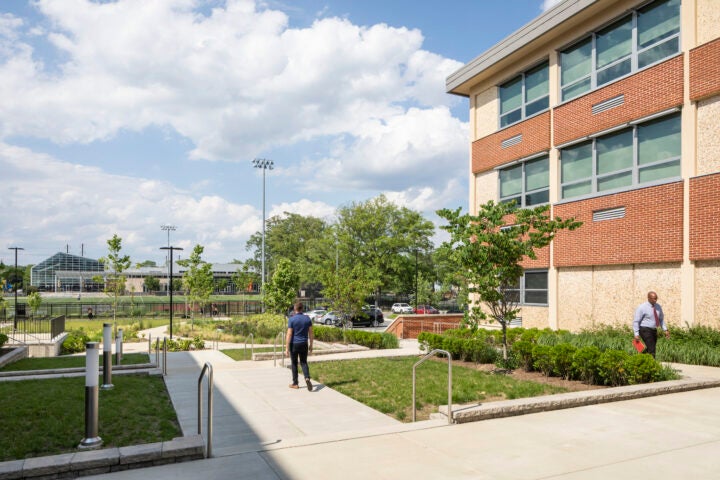 The next moves were to give the school’s two wings a heart and soul. The academic wing’s library was a largely enclosed, single-story space off the entry. To punctuate the importance of learning and scholarship, the new design expanded the library up through the second story and added a curtain wall of glass that visually expands the space into the courtyard. 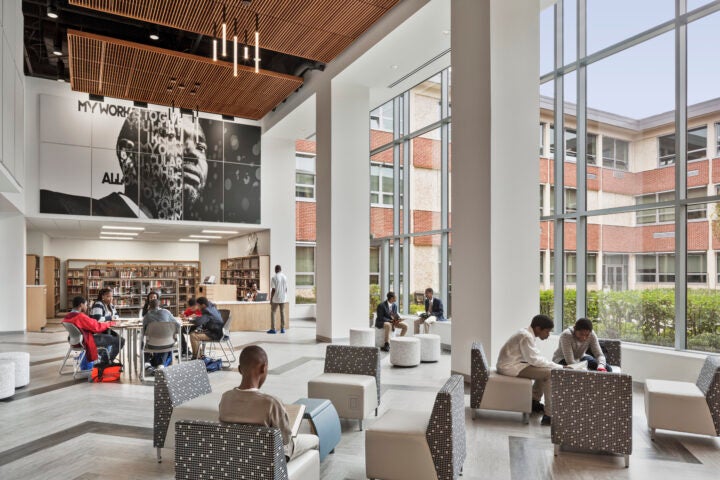 “The library was key as a place of high aspiration, high achievement,” O’Donnell says, making it the heart of the school’s mission. A new Fraternity Hall stretches out from the other side of the entry, lined with artwork depicting famous alumni and other notable men of color. It’s where students gather in the mornings, and also where the school’s community gathers to talk through issues collectively—in other words, the building’s soul. 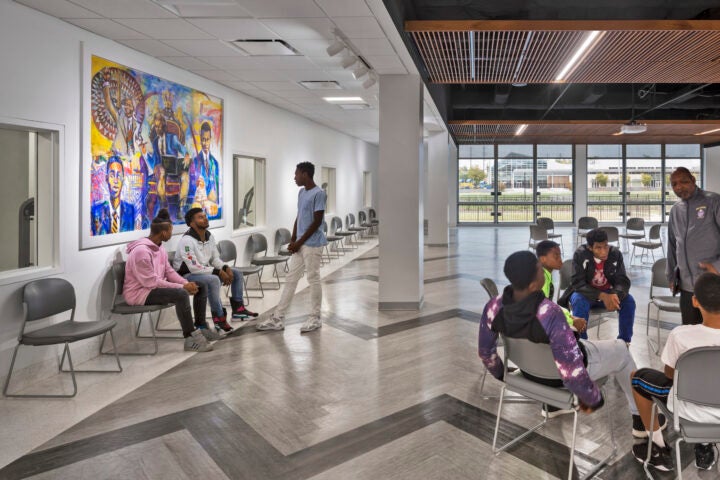 The entire project is a lesson that existing buildings—even if they seem drab—can offer potential to be so much more, O’Donnell says. “We give what’s existing a fair shake to be part of the solution. We’re not just here to do great architecture. We’re here to create great places to learn,” he explains. “You often realize that with a couple of strategic moves, an existing building can rise to that challenge.”